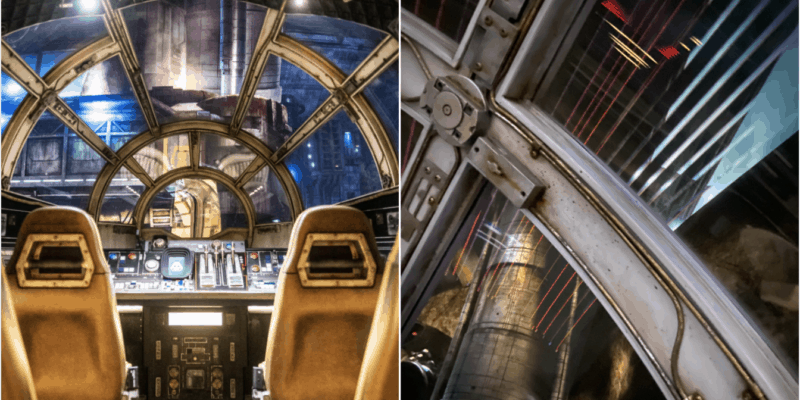 While there, Sophia decided to ride Millennium Falcon: Smugglers Run — where she and her party experienced a bizarre screen malfunction!

Sophia shared the following details with Inside the Magic, including an image of where the apparent technical error occurred. Below, she Sophia described the route that her party took to get to the specific attraction vehicle where they experienced the ride:

we went this way, and straight. just to give a bit more info- on the left side, there was a darkened rectangle of the screen going from the middle to the bottom. i took the normal picture and one with flash.

As you can see in the images below, the screen malfunction caused some visual obstructions while Guests were riding the attraction. Sophia indicated to ITM that the non-flash photo [below] is the most accurate depiction of what she and other Guests saw while riding Smugglers Run last night.

The flash photo [below] shows a slightly different perspective.

To put it in perspective, the screen on Millennium Falcon: Smugglers Run is usually completely clear as Guests fly the Corellian light freighter through a galaxy far, far away on a mission from Hondo Ohnaka — part-owner of the Falcon following Han Solo’s unfortunate death in Star Wars: Episode VII – The Force Awakens (2015).

As for yesterday’s screen malfunction, it’s unclear what exactly caused the issue — but our money is on something being wrong with the hyperdrive.

Have you ever experienced a ride malfunction at a Disney Park?