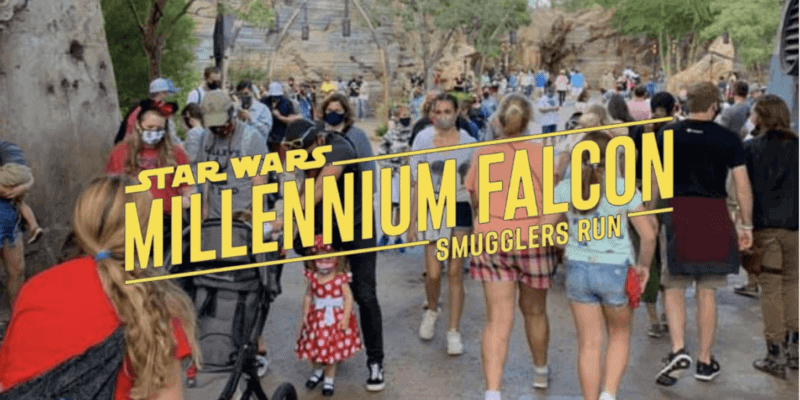 From the moment Star Wars: Galaxy’s Edge was announced at the 2015 D23 Expo in Anaheim, California, fans of the franchise have been thrilled at the opportunity to visit a galaxy far, far away for the first time.

The two attractions at Galaxy’s Edge — which are identical at Disneyland Park in California and Disney’s Hollywood Studios in Florida — have drawn massive crowds ever since they debuted in 2019.

Star Wars: Rise of the Resistance, as all fans of the Star Wars-themed land know, is considered one of the most immersive theme park rides of all time. It utilizes a virtual queue system to limit daily capacity and control how long it takes Guests to board. Boarding Groups are currently assigned using the My Disney Experience app at 7 AM and 2 PM each day.

Millennium Falcon Smugglers Run, on the other hand, uses traditional Standby and FastPass+ queues at Disney World. With FastPass currently unavailable during the phased reopening process, however, Guests only have access to a socially distanced Standby queue.

Check out our photos of the wild Smugglers Run queue here:

It is worth noting that social distancing was enforced throughout the line and Cast Members were stationed at various points to ensure that both physical distancing and face mask requirements were being met.

However, the sheer length of the line — due in part to social distancing measures — made it challenging for other Guests to navigate Star Wars: Galaxy’s Edge without coming into close contact with those waiting to ride Millennium Falcon Smugglers Run.

Here, the end of the line, near the entrance to the land, can be seen where there is a Cast Member holding a yellow sign.

Since Walt Disney Company CEO Bob Chapek has recently announced a capacity increase — to 35% of Walt Disney World Resort’s maximum capacity —  it seems likely that Disney will have to do something to aid with the length of lines, particularly at the immensely popular Hollywood Studios theme park.

The return of Park Hopper tickets in January was confirmed today and may very well help with queue lengths. A return to the FastPass+ program could also assist with lines — note that Disney has not yet confirmed anything about FastPass coming back.

Or, Disney could implement more virtual queues similar to Rise of the Resistance. This is something Parks, Experiences and Products Chairman Josh D’Amaro has indicated could be a possibility.

Only time will tell exactly how Disney plans to handle ride and attraction queue lengths. but the Smugglers Run line was, to this writer, an awakening that they cannot continue in exactly this fashion if capacity continues to increase.

Have you ridden either Star Wars: Galaxy’s Edge ride since Disney World reopened? What was your experience?