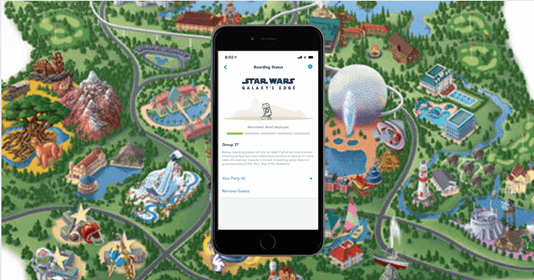 Today, at the IAAPA Expo, Disney made a laundry list of announcements regarding upcoming projects — including an exciting inside look at EPCOT’s new Space 220 restaurant, details about Shanghai Disneyland’s Zootopia land, and the first pictures of the ride vehicles for WEB-SLINGERS: A Spider-Man Adventure at Disneyland Resort.

The most intriguing “announcement” of all, however, just might have been hidden in a seemingly innocuous statement Parks, Experiences and Products Chairman Josh D’Amaro made. An Orlando Sentinel article shared this about D’Amaro’s remarks today:

D’Amaro praised the company for moving nimbly during the pandemic. The online reservations system that helps Disney control its crowds was built within a few weeks, a project that might normally have taken a year or more to build, he said.

He said he has dared his Imagineers to dream bigger and differently in the future.

Related: Will Socially Distanced Queues Be Permanent at Hollywood Studios?

The thing that caught our eye at Inside the Magic is the fact that D’Amaro specifically said, “Do you really have to wait in line?”

There have long been rumors — particularly following the new social distancing regulations put in-place during the COVID-19 outbreak — that all Disney Parks will move to a fully virtual queue system, similar to what is used on Star Wars: Rise of the Resistance at Galaxy’s Edge on both coasts.

Furthermore, Disney has continually tweaked the Rise of the Resistance boarding pass process, including a very recent update that allows Guests to reserve their boarding group before they even arrive at Disney’s Hollywood Studios — or, presumably, Disneyland Park when it reopens.

It is very possible that Disney Parks officials are trying to perfect the virtual queue system ahead of Walt Disney World Resort’s 50th Anniversary in 2021.

Although nothing has been confirmed by Disney about more virtual ride queues arriving before next year, it would seem to be a great time to roll out a feature that would make attractions operate even more efficiently — and free Guests up to enjoy more of the “Most Magical Celebration on Earth” festivities!

Furthermore, when Disneyland Park and Disney California Adventure Park are eventually allowed to reopen in Anaheim, the new Avengers Campus — where the undoubtedly popular WEB-SLINGERS ride will be located — is the perfect land in which to implement more virtual queues

Again, Disney has not confirmed a move to a fully virtual queue system in its theme parks.

Nonetheless, Walt Disney Company executives like D’Amaro rarely say anything by chance, so it seems likely that his comment about waiting in line does portend some eventual change to how Disney Parks ride queues operate.

What do you think? Should there be more virtual queues at Disney World, Disneyland, and Disney Parks around the world?