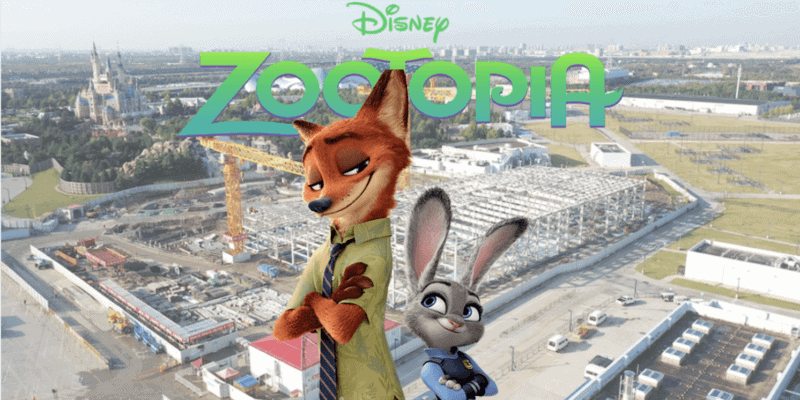 When The Walt Disney Company announced in 2019 that they would be building their first-ever Zootopia themed land at Shanghai Disneyland, fans of the hit movie were ecstatic.

Zootopia (2016) was instantly popular with Disney fans of all ages — it features lovable characters like Judy Hopps and Nick Wilde for kids and great life lessons, like inclusion, for parents.

Today, at the 2020 IAAPA Expo, Disney Parks officials provided an update about construction progress on Shanghai’s Zootopia section. From the looks of things, the land is going to be massive!

Here, a brand new aerial image provided by Disney shows the scale of the Zootopia land’s show building — you can see Enchanted Storybook Castle and the TRON Light Cycle Run Power Coaster in the background for size comparison.

Soon after the Zootopia expansion was announced, Disney Parks Blog shared these details about what Guests can expect:

Although details about Zootopia themed rides and attractions have not been confirmed, Disney did share a few details today, noting that:

It [Zootopia] will include a new major attraction that will seamlessly blend Disney storytelling and state-of-the-art technology to bring this fan-favorite movie and its characters to life.

While we don’t know exactly what this means, Disney has been filing a number of augmented reality patents in recent weeks that could potentially play a role.

This is the first announcement that has been made in regard to the ride and attraction experiences Zootopia Guests can anticipate, so it is exciting information.

Sign up for Inside the Magic’s newsletter so you don’t miss a minute of the latest Disney Parks news!