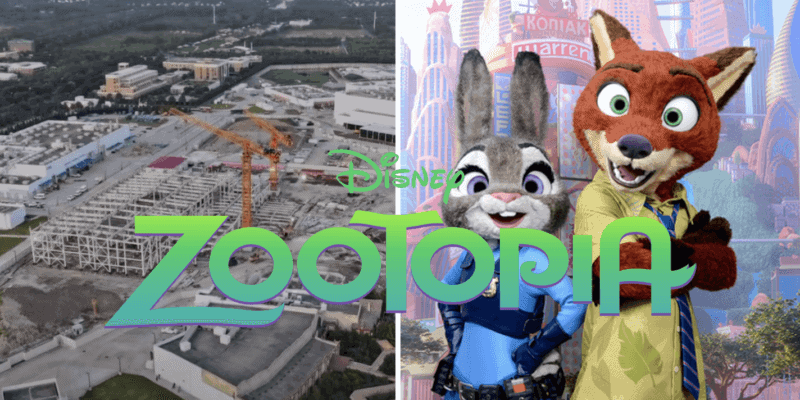 At the 2019 D23 Expo in Anaheim, The Walt Disney Company announced that Shanghai Disneyland would be getting the world’s first Zootopia themed land. The groundbreaking for the new land occurred in December 2019 and vertical construction started earlier this summer.

This image gives Disney Park fans a good idea of where Shanghai Disneyland’s Zootopia section will be in relation to the incredible Enchanted Storybook Castle.

Ripley also provided closer shots of Zootopia’s progress, like the one below.

Here, we can get a good idea of the scale of the new Disney theme park area and how it will be laid-out when it is completed. The DSNY Newscast team shared their thoughts on where certain buildings from Zootopia land concept art might be located.

It seems likely that this round area at the construction site will eventually become the Zootopia police academy, where Nick Wilde and Judy Hopps ultimately end-up working for Chief Bogo.

This street corner looks as though it could house the storefront seen in this Disney concept art.

“Guests will be invited to experience the mammalian metropolis of Zootopia ‘where anyone can be anything,’ with a new major attraction that will seamlessly blend Disney storytelling and state-of-the-art technology to bring this fan-favorite movie and its characters to life — including Judy Hopps and Nick Wilde. Entertainment, merchandise, and food and beverage offerings will invite guests to fully immerse themselves in the Academy-Award-winning animated movie.”

Zootopia was a box office smash in China, so it’s no surprise that Disney theme park executives chose Shanghai as the location of their first foray into a Zootopia themed area.
Do you hope to visit Zootopia when it opens at Shanghai Disneyland? What are your thoughts on the latest Zootopia land construction progress?