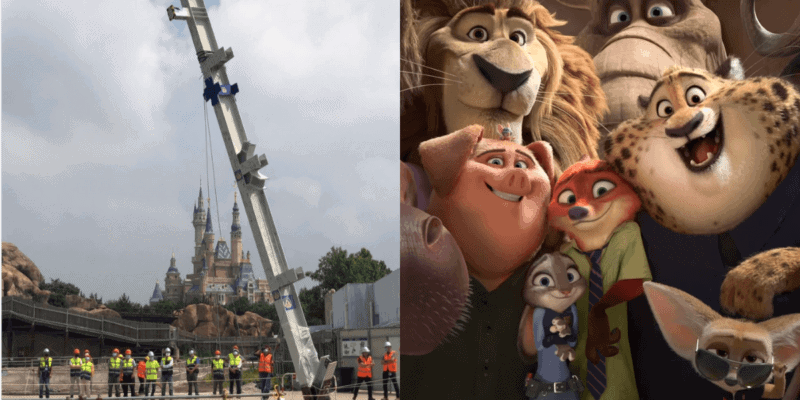 Shanghai Disney Resort continues to show signs of progress in the aftermath of the park shutdown that lasted nearly four months. Shortly after announcing park reservations are possible with general admission, it has now been shared that construction is continuing on the theme park’s new Zootopia-themed land.

The news comes to us via Twitter from user @DMK_Blog who shared pictures and wrote:

“Development of Judy and Nick’s new home in Shanghai today reached an exciting milestone, as the first steel column of the Zootopia-themed land was installed — marking the commencement of vertical construction at Shanghai Disneyland’s newest themed land.”

This news was confirmed by Shanghai Disney Resort who took to social media themselves to share their official pictures, saying:

Vertical construction has officially started at Judy and Nick’s future Zootopia home here at Shanghai Disneyland! Signed by both Cast Members and Imagineers, the installation of the first steel column will forever connect our teams with this exciting new land!

A post shared by Shanghai Disney Resort (@shanghaidisneyresort) on Jun 8, 2020 at 9:51pm PDT

The main construction of the land officially began in December of 2019. The moment was marked by the President and General Manager of Shanghai Disney Resort, Joe Schott, who said:

“We are pleased to announce the start of main construction for the new land today, a significant milestone in its development. This expansion demonstrates Shanghai Disney Resort’s commitment to bringing new and unique experiences to our guests, offering more reasons for them to come visit us again and again.”

Vertical construction simply means that the resort has now reached a point where they can begin to build the buildings from those that will house the attractions, restaurants, and gift shops to–hopefully–the backdrop of Zootopia‘s cityscape.

The pictures also show construction workers wearing masks which is no doubt a new requirement on the post-pandemic construction sites.

Once completed, Zootopia will be a heavily immersive experience offering state-of-the-art attractions. It will be a place just like that in the movie “where anyone can be anything.” There is still no opening date set and very little is still known about the attractions themselves.

Outside of the theme park, Nick Wilde, Judy Hopps, and the rest of their Zootopia friends are apparently gearing up for two more movies. The second film is expected to hit theaters in late 2021.

Is the news about Zootopia getting you excited to plan your own trip to the Shanghai Disney Resort? If so, our friends at Academy Travel are standing by ready to help you create the best possible Disney vacation for your budget. Click here to learn more and receive your free, no-obligation quote today!

Are you excited for Zootopia to come to Shanghai Disneyland? What kind of rides or attractions do you hope to see added? Let us know in the comments!