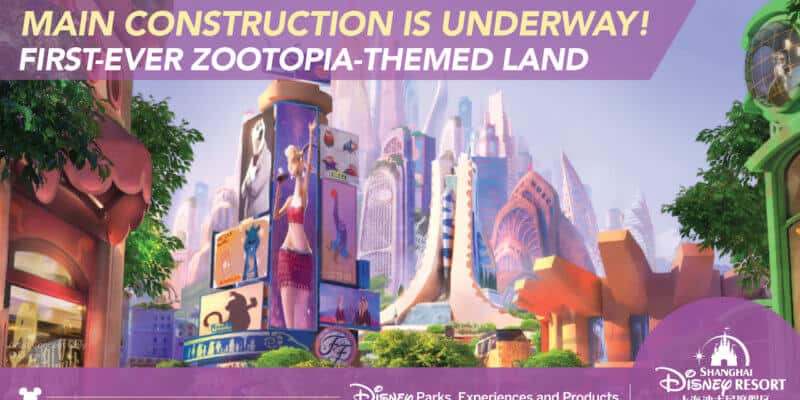 Shanghai Disneyland officials confirmed earlier today that the main construction of the highly-anticipated Zootopia-themed land has begun, and it looks like everybody’s pitching in to help!

Construction of the new themed land was accompanied by a short video where Mickey, Minnie, and all their friends came together to help Nick Wilde and Judy Hopps build their new home! You can watch that video here:

“We are pleased to announce the start of main construction for the new land today, a significant milestone in its development. This expansion demonstrates Shanghai Disney Resort’s commitment to bringing new and unique experiences to our guests, offering more reasons for them to come visit us again and again.”

This will be Shanghai Disney‘s second park expansion project after the opening of Toy Story Land in Spring 2018. Since site preparation work began, the area has been fenced off with appropriate décor as shown below.

What can we expect?

Zootopia will focus heavily on immersion, surrounding guests with not just the citizens of Zootopia but also themed entertainment, merchandise, and concessions. It will be a place, just like the movie, “where anyone can be anything.” As far as thrills go, Disniacs were promised a state-of-the-art ride featuring Judy Hopps and Nick Wilde.

The news of a Zootopia land was announced at this year’s D23 Expo in Anaheim, California. And since that announcement, excitement has built up in Disniacs all over the world.

“This is an immensely exciting time for Shanghai Disney Resort and Zootopia fans alike,” Schott added. “Since we announced the development of our new Zootopia-themed land earlier this year we have been overwhelmed by the excitement and anticipation expressed by fans from across China and around the world.”

There is still no opening date set.

If you are planning a trip to Shanghai Disney Resort, the experts at Academy Travel are standing by to ensure you have the most magical adventure possible.

Are you a fan of Zootopia? Are you excited to see it in a Disney park? Let us know in the comments!