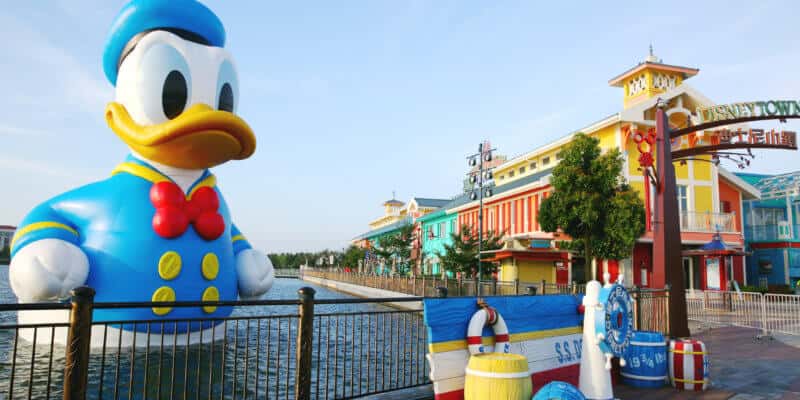 One of the most iconic and beloved Disney characters of all time is about to get the birthday celebration of a lifetime at Shanghai Disney Resort! The Disney Park is celebrating the hilarious duck with a multi-day celebration with a plethora of Donald-inspired merchandise, food, beverages, entertainment and more!

Since the opening of the Disney resort in 2016, Donald Duck has made hundreds of thousands of Chinese guests of all generations smile, laugh and quack as the character is a classic that many Disney fans grew up with. First appearing in 1936 in The China Press alongside Walt Disney’s other cartoon offerings, the duck grew in popularity and started to appear in a number of cartoons and comics throughout China. Since then, the character has gone on to be a fan favorite with Chinese guests of all ages! So where better than Shanghai Disney Resort to celebrate the fiery tempered duck?

Taking place from June 3 to 9, Donald Duck’s meet and greet location will feature celebratory birthday decor! Additionally, Mickey Mouse will also be handing the baton over to Donald to lead the Shanghai Disneyland Band, adding his charm and humor to the show as he guides the musicians through performances on Mickey Avenue.

On June 9 there will also be a special birthday ceremony near Storyteller Statue, featuring Donald Duck and his friends, Mickey, Minnie, Daisy, Goofy, and Pluto. Guests will also be invited to join the celebration and sing “Happy Birthday” to Donald!

The celebrations also include an all-new assortment of Donald Duck-themed food and beverage offerings, including ice creams, waffles, specialty drinks, and souvenir goblets to take home.

The resort will also be offering new birthday packages for guests looking to celebrate with their family and friends at one of several in-park restaurants. The packages feature a birthday feast, special beverages, a birthday cake featuring some of the most popular Disney characters, including Donald, and birthday party favors, with a variety of options available.

To commemorate his birthday, here are some fun facts about just how popular Donald Duck is amongst Chinese guests at Shanghai Disney Resort:

Will you be celebrating Donald Duck’s birthday at Shanghai Disney Resort? Let us know in the comments below!