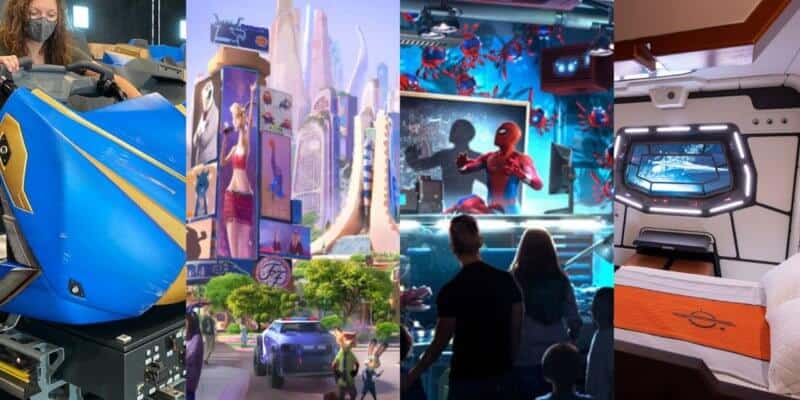 At today’s 2020 IAAPA Expo: Virtual Education Conference, Chairman of Disney Parks, Experiences and Products Josh D’Amaro gave us Disney fans many hopeful glimpses into attractions, as well as new Disney Park updates that we can expect in the future.

Disney Parks released a video about many of the updates that will be coming to the Disney Parks across the globe, highlighting highly anticipated attractions such as Guardians of the Galaxy: Cosmic Rewind and Remy’s Ratatouille Adventure, both set to open in 2020 at EPCOT. After such a challenging year for the Disney Parks, including major setbacks on attractions, watching this video may make you a little emotional when you can see the magic to come! (Plus, the epic Marvel-esque score in the background gives it an added flare!)

What updates can we expect?

With Disneyland Resort being closed for the past 8 months, the Avengers Campus opening date of July 2020 at Disney California Adventure had to be postponed. This has left many of us Marvel fans begging to know more on the land and what to expect at both Disneyland Resort, and Disneyland Paris.

Today, we were able to see the epic ride vehicle for WEB SLINGERS: A Spider-Man Adventure, where , as Disney describes, “Guests will be able to board vehicles and help Spider-Man take control of an army of Spider-Bots that have taken over Avengers Campus.

And speaking of Marvel, Disney also added, “Guests visiting Disneyland Paris will also soon be able to experience Disney’s Hotel New York – The Art of Marvel – celebrating 80 years of Marvel storytelling in a typical New York setting. The resort will feature contemporary Art Deco style and include one of the largest publicly viewable collections of Marvel artwork in the world.”

Bob Chapek previously stated, “We’re going to create a hotel at Disneyland Paris that would make Tony Stark proud, I’m thrilled to announce that Disney’s Hotel New York – The Art of Marvel will transport our guests to the action-packed, inspiring world of Super Heroes including Iron Man, The Avengers, and Spider Man among others!”

This hotel will be a perfect addition to the new Avengers Campus that will be arriving at Disneyland Paris!

EPCOT is a major player in terms of updates coming to the theme park, and the epic nighttime show HarmonioUS, is the first of many announcements. Inside the Magic has been closely following the construction updates on the show, with the barges looking even more ready each day.

Disney has already tested fireworks at the parks, even though there is currently no nighttime show going on. Although we do not have an official opening date for the show yet, the testing of fireworks leaves Guests hopeful that we will be able to see what is set to be Disney’s best nighttime show yet.

We were able to take a look inside the attraction’s brand new ride and see what the track would look like with the lights on!

After hearing this news, ITM also reported “The brand new Guardians of the Galaxy: Cosmic Rewind attraction will begin in the “Galaxarium,” which is a planetarium-like exhibit that will explore similar aspects of Earth’s galaxy and Xandar. Guests will join Star-Lord, Gamora, Drax, Rocket Raccoon, and of course, Groot as they go on an out-of-this-world adventure.”

Disney Parks has since released a video of the coaster testing, and it looks like we are going to be on a spinning adventure once the attraction opens to EPCOT Guests, including an epic reverse launch.

For Remy’s Ratatouille Adventure, we found out something we already began to assume. The Disneyland Paris attraction which will soon be featured at EPCOT will be opening in 2021 opposed to 2020. Considering we are almost at the end of 2020, this official announcement is not much of a shock to us.

However, we are still very excited to shrink down the Remy’s size and ride on this trackless attraction!

For what is set to be the most immersive Disney Resort expeierinece yet, Star Wars fans can begin drooling to board the Galactic Starcruiser.

Guests will live aboard a starship for a 2-day, 2-night experience. Unlike any typical cruise, though, you can become the heroes of your own Star Wars story in a new type of immersive experience that only Disney could create.

Guests will cruise the galaxy in style aboard the Halcyon, known for its impeccable service and exotic destinations. Onboard, you’ll stay in well-appointed cabins, experience onboard dining, make a planet-side excursion to Black Spire Outpost on Batuu and much more.

Shanghai Disney is getting ready to open a new incredible land based on the film Zootopia. This land is going to bring the Disney characters to life, and as Disney Parks Blog explains,

At Tokyo Disneyland, one of Disney’s most amazingly detailed parks, we will see some new updates! Disney noted, “also, part of the expansion will be “Fantasy Springs.” This exciting development will be themed to a magical spring inspired by the beloved Disney Animation films “Frozen,” “Tangled” and “Peter Pan.” It’ll include four new attractions, three restaurants and a new Disney-themed hotel situated inside Tokyo DisneySea that will overlook Fantasy Springs.”

For more Disney Parks updates, stay tune to Inside the Magic!

Space 220 is the latest restaurant to find a home in EPCOT! The restaurant will give Guests the sensation that they are dining in space, making this a Disney experience like no other. Space 220 should have already opened this year, but due to the pandemic, plans were put on hold. We are now hoping for a 2021 reveal!

We can also expect to see Mickey and Minnie’s Runaway Railway come to Disneyland in 2021 entering Toontown! The attraction which has already debuted at Disney World in Disney’s Hollywood Studios was a smash-hit for Guests, so the new addition out West will be loved just as much.

What are you most excited to see come to the Disney Parks?