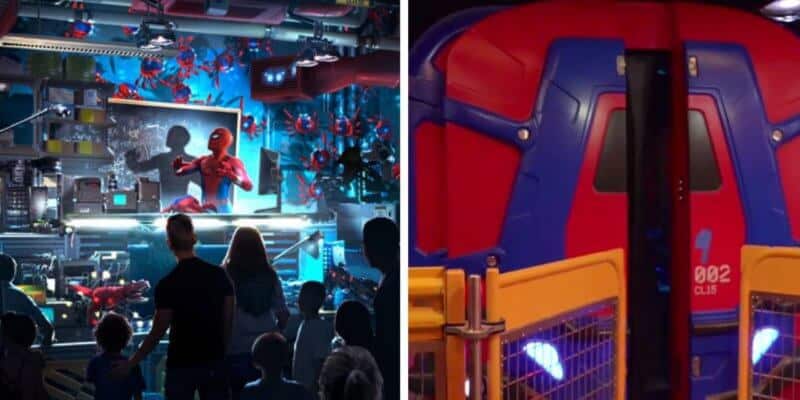 If you have been patiently waiting for Avengers Campus to open at Disney California Adventure theme park, this update is about to make you a little more impatient. We now have an inside look at the WEB-SLINGERS: A Spider-Man Adventure attraction ride vehicle.

The 2020 IAAPA Expo is currently underway and many Disney fans are looking for updated details on the Disney Parks. Thanks to the DLP Report (@DLPReport) on Twitter, we can see first-look photos of the new Spider-Man attraction at DCA, and it looks intense.

Related: Canada Is Getting Its Very Own ‘Avengers Campus’

The ride vehicle features a red and blue exterior that closes you in with an open front. The open front will work perfectly for the interactive aspect of this attraction, where Guests will get to sling webs themselves and watch them appear! Interestingly enough, the blue on the exterior of the doors seems to look a lot like the Avengers classic A, fitting in perfectly with the new land.

⚠️ Side look at the ride vehicle for the Spider-Man Web Slingers attraction #WDS2 #IAAPAExpo pic.twitter.com/RMmi3CCEoN

WEB SLINGERS: A Spider-Man Adventure is a new, action-packed adventure that invites you to put your web-slinging skills to the test!

The mission: team up with Spidey and help capture the out-of-control Spider-Bots before they wreak havoc on the Campus. During an open house at WEB, you will be asked to wear 3D glasses and test drive their latest invention, the WEB Slinger vehicle, which allows you to sling webs like Spider-Man. The attraction will give you a taste of what it’s like to have actual super powers as you help Spider-Man collect Spider-Bots that have run amok!

Considering this Marvel IP was previously only found in Universal Orlando’s Island’s of Adventure, it will be interesting to see a Spider-Man ride find a home in Disney, and to see what technological advancements will take place on this attraction in comparison to The Amazing Adventures of Spider-Man over at Universal, which admittedly shares a similar ride vehicle look.

Until Disneyland Resort reopens and Avengers Campus is able to pull us in and bring the MCU to life, stay tuned to ITM as we continue to find all the latest updates on the new land.

Are you excited to ride the new Spider-Man attraction?