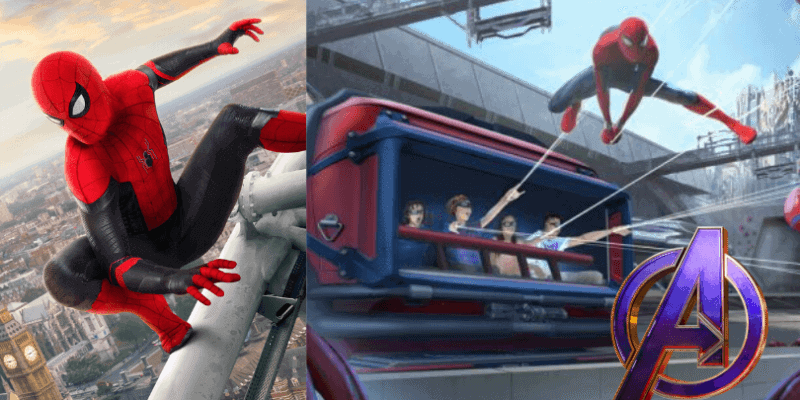 We keep hearing more and more new information about Avengers Campus at Disney California Adventure, and we can’t get enough! Disney just revealed the opening date for the highly-anticipated land, we finally know all about the new characters who will be coming to Avengers Campus, and now we’ve heard more details about the Spider-Man ride that will open this summer.

The Official Name for the New Ride – WEB SLINGERS: A Spider-Man Adventure

Today Disney announced that the official name for the new attraction is WEB SLINGERS: A Spider-Man Adventure. For us fans of Spider-Man (we love meeting him in the parks!), it’s pretty exciting to finally get a name reveal for the ride. And since the objective of the attraction is to learn how to sling webs like our pal Spidey himself, the name seems very fitting!

Disney also shared an official description of the attraction, which you can read below:

WEB SLINGERS: A Spider-Man Adventure is a new, action-packed adventure that invites you to put your web-slinging skills to the test!

The mission: team up with Spidey and help capture the out-of-control Spider-Bots before they wreak havoc on the Campus. During an open house at WEB, you will be asked to wear 3D glasses and test drive their latest invention, the WEB Slinger vehicle, which allows you to sling webs like Spider-Man. The attraction will give you a taste of what it’s like to have actual super powers as you help Spider-Man collect Spider-Bots that have run amok!

Best of all? The ride is family-friendly! When Disney made the decision to close a bug’s land and replace it with Avengers Campus, many parents were concerned about whether there would be anything for their little ones to enjoy in the super hero-themed land. But we’re happy to report that this Spider-Man attraction is totally family friendly: there is no height requirement, so aspiring heroes of all ages can get the chance to ride it. We think this is a great decision on Disney’s part.

Of course, one of the great announcements made today was that Tom Holland himself — the man who plays Spider-Man (and of course Peter Parker) in the Marvel Cinematic Universe — will also get to play the super hero in the new ride.

“WEB is all about how bright young innovators like Peter Parker are inventing new technologies that let all of us become Super Heroes,” said Scot Drake, Creative Executive, Marvel Global Portfolio, in Disney’s announcement. “Being able to authentically represent Peter’s character was a critical element to our story, and thanks to our Studio partners, I’m excited to share that Tom Holland will reprise his role as part of this attraction experience. It was an honor to get to work with Tom, and I can’t wait for guests to experience the amazing talent, humor, and heart he’s bringing to this attraction when it opens this summer.”

Book a Trip to Disneyland Resort!

Now that we know when Avengers Campus will officially open, it’s time to book those Disneyland vacations! The new land looks like it will be absolutely spectacular, and as the first Avengers-inspired land in any Disney theme park, we’re thrilled that guests will get to experience it in just a matter of months. If you’re ready to book your Disneyland trip or you want more information, contact the Authorized Disney Vacation Planners at Academy Travel.