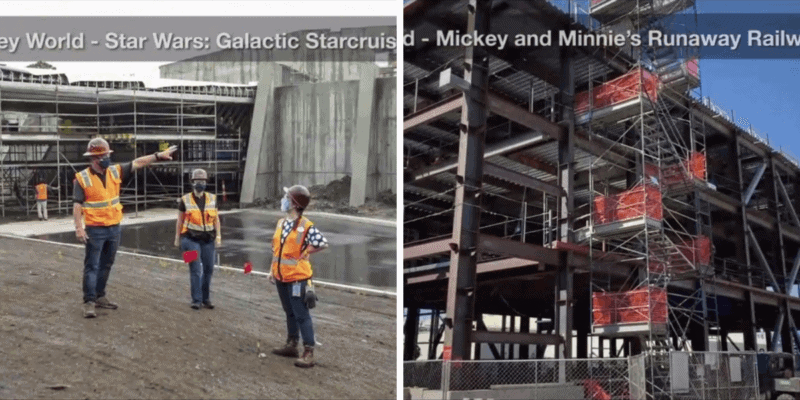 Today, we have a new behind-the-scenes look at some of the ongoing construction projects around both Walt Disney World Resort in Florida and Disneyland Resort in California.

Disney gave a presentation during this year’s virtual IAPPA conference in which Parks, Experiences and Products Chariman Josh D’Amaro showed fans a glimpse of the projects Disney has been working on.

Disney has previously come out and let fans know which project are moving forward and being prioritized. We are glad to see the progress on these projects!

You can read more details about Josh D’Amaro’s presentation as he was a keynote speaker for IAPPA 2021 here.

Thanks to tweets from reporter DLP Report on Twitter, we can see that Disney showcased the continued construction of the Galactic Starcruiser hotel and Guardians of the Galaxy roller coaster at WDW and Mickey and Minnie’s Runaway Railway inside of Disneyland’s ToonTown.

⚠️ New look at construction of the Galactic Starcruiser hotel and Guardians of the Galaxy Cosmic Rewind at Walt Disney World, and Mickey & Minnie’s Runaway Railway at Disneyland #IAAPAExpo pic.twitter.com/Bgux2qjsx3

We are so excited to see these projects continue on their paths to competition even after this difficult year. Though Disney has had setbacks due to the coronavirus pandemic, they are soldiering on to bring Guests new and exciting experiences.

The Galactic Starcruiser, or as fans more affectionately call it, “The Star Wars Hotel”, is getting closer and closer to welcoming its first Guests. We know that this highly immersive experience will transport you into the world of Star Wars, and with a minimum two-night stay requirement this experience could set you back thousands of dollars — though official pricing has not yet been announced.

Disney is continuously doing construction and filing new patents for technology that could be used at this revolutionary hotel.

Disney released the first images of the actual hotel rooms, these photos truly showcase the immersive nature of the Hotel. You can see that the window shows Guests a view of space, and control panels are scattered around the room.

Disney went on to say this about the Galactic Starcruiser:

In a galaxy far, far away, progress continues at Star Wars: Galactic Starcruiser, where guests will live aboard a starship for a 2-day, 2-night experience. Unlike any typical cruise, though, you can become the heroes of your own Star Wars story in a new type of immersive experience that only Disney could create.

Guests will cruise the galaxy in style aboard the Halcyon, known for its impeccable service and exotic destinations. Onboard, you’ll stay in well-appointed cabins, experience onboard dining, make a planet-side excursion to Black Spire Outpost on Batuu and much more.

We cannot wait to get an opening date for this incredibly unique hotel. We know this will be an extremely popular experience and we will continue to monitor its progress until it has its grand opening and beyond!

Here is another look at what the rooms actually looks like! All we can say is, WOW!

Guardians of the Galaxy: Cosmic Rewind is the massive indoor roller coaster that is currently under construction at EPCOT. While we do not yet have an opening date for the coaster, we loved seeing Disney give us a photo of the track layout that is currently under construction. With all of the twist and turns it looks like this will truly be a thrilling experience when it starts to operate, hopefully in the near future!

Lastly, we have a look at Mickey and Minnie’s Runaway Railway that is being constructed at Disneyland. With the successful opening of the attraction at Walt Disney World, we are sure that fans of Disneyland were excited to see that things are moving forward on this project.

The project at Disneyland has been delayed until 2023, as per an announcement earlier this year.

Disney shared a great video which showcased even more construction project that is ongoing across its many resorts! It is a very exciting time to be a Disney fan. If this video is interesting to you we have even more information for you here on all of the major changes happening at Disney Parks around the world!

Do all of these behind the scenes looks at upcoming attractions and hotels get you excited for your next Disney trip? Let us know in the comments!