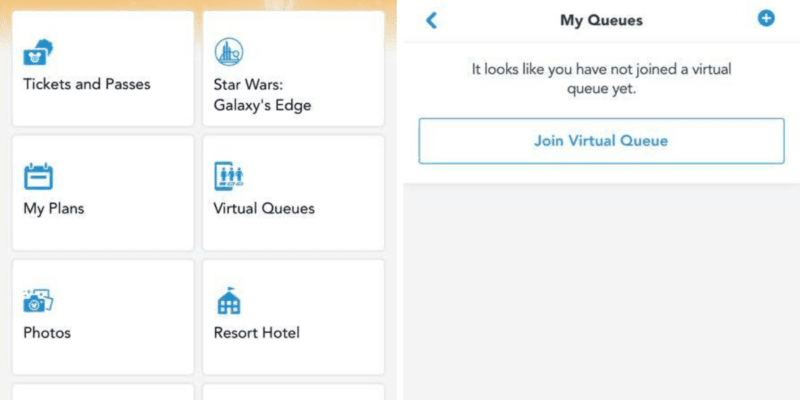 The Walt Disney World Resort app, My Disney Experience, is updating again…and Virtual Queues are back.

Now, the Virtual Queues tab has been re-added back to the My Disney Experience app. Take a look at the screenshots we shared below:

When we first reported on this in March, we shared that the new Virtual Queues section of MDE could indicate a new home for the Rise of the Resistance Boarding Groups, as well as other virtual queues that Disney may decide to implement at other attractions across Walt Disney World. When it comes to social distancing, virtual queues can be a great option. We’re already seeing them used for retail locations on Disney property (except they are being called Virtual Wait lists and you get a text message when it’s your turn to shop instead of using the WDW app). So perhaps the Virtual Queues option could be used for not only attractions but also shopping.

Related: Virtual Queue in Use for Splash Mountain Gift Shop

Keep in mind that at this time, the FastPass+ system at Walt Disney World Resort has been temporarily paused, and Disney has not shared when FastPass+ will relaunch. Disney also has not publicly commented on the Virtual Queues update in the My Disney Experience app, and we are not sure at what time (or even for what attractions) they will be rolling it out for Disney World Guests.

Do you hope more Virtual Queues come to Walt Disney World or Disneyland? Let us know in the comments!