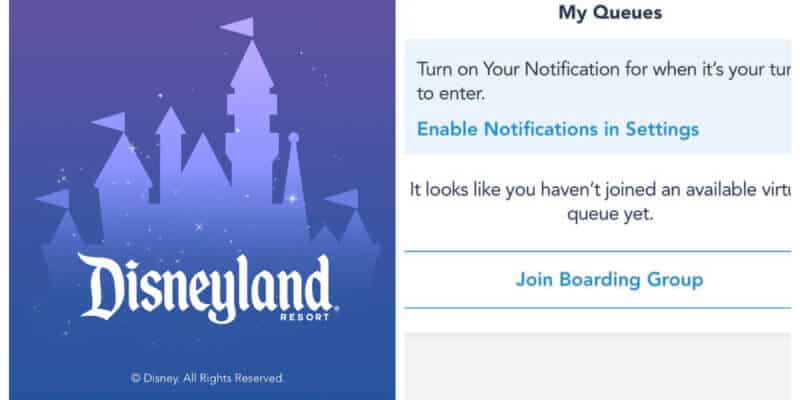 It appears Disney is taking the time while the theme parks are closed to do some internal work, specifically to the Disneyland mobile app.

Prior to the parks closing, once you launched the Disneyland or My Disney Experience mobile app the first thing you saw under the park map was the notice about joining Boarding Groups for the new attraction, Star Wars: The Rise of the Resistance.

This technologically ground-breaking attraction was bound to draw massive crowds. In an effort to ensure a good guest experience, Disney implemented a Virtual Queue so that guests without a FastPass+ would not have to wait in a regular stand-by queue for long hours to experience it.

This process has been met with mixed reviews, but for the most part, and for those guests who have been lucky to score a boarding group, it’s served its purpose.

Today, Twitter users are reporting an update on the app that hints at the implementation of more Virtual Queues in the near future.

User @Hastin shared some screenshots of the Disneyland App from his phone that showed a new section called “My Queues.”  See photos below:

Wow so the new MDX/Disneyland app update totally changed the wording for Boarding Groups status, instead called "My Queues". Seems like there might be plans to extend it. pic.twitter.com/ewpGLw3RFS

Currently, while the theme parks are closed, we launched the Disneyland mobile app to see if we could duplicate these screens. Our team all had different screens to show. Some showed the Play option, others saw the shopDisney option, while others could still browse mobile orders.

One of our Inside the Magic Reporters was able to duplicate what Twitter user @Hastin saw as well.

Currently, there’s no way to test this new option until the parks re-open, so stay tuned for more updates regarding these developments. It might be perhaps it was either a test Disney was conducting prior to rolling this option out in the near future or simply a mistake they are working to correct.

We’ll be sure to share as we learn more about any changes Disney is gearing up for once they are able to open back the gates (and we are counting down the days!).

What are your thoughts on additional Virtual Queues for popular attractions? Would you like to see Disney implement these changes or do you rather stick to FastPass+, MaxPass, or just the regular standby queue? Let us know your thoughts in the comments!