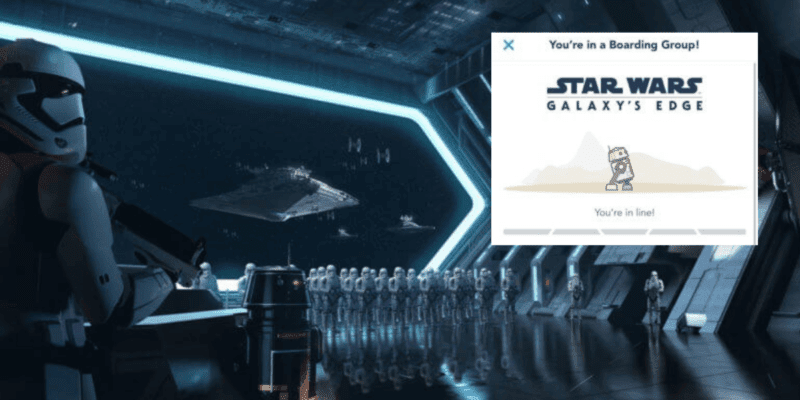 If you’ve ever been standing outside of Disney’s Hollywood Studios Park at Walt Disney World or Disneyland Park at Disneyland Resort ahead of rope drop trying to snag an elusive Star Wars: Rise of the Resistance boarding group, you know how stressful — exciting, but stressful — the experience can be!

Now, Disney Parks Blog has announced that changes are coming to the boarding group process. This brand new pilot program is designed to make Guests’ overall Disney theme park experience even better — and could potentially impact more rumored virtual queue systems for attractions in the future.

To better help guests visiting Disney’s Hollywood Studios plan ahead for their day at the park, we’re piloting a new approach to the virtual queue system for Star Wars: Rise of the Resistance. Starting Nov. 3, 2020, here’s how it will work:

This differs from the last update, which offered 10 am and 2 pm EST boarding group periods. It seems that Disney World officials have realized that people preferred an earlier time for the first round of Rise of the Resistance boarding group passes.

According to Guest Services via the Disney World online chat, Guests staying at both onsite Walt Disney World Resort Hotels and offsite locations will have an “equal chance” of securing Rise of the Resistance boarding group passes.

This means that either cellular data or WiFi can be used, depending on which is faster in your situation — run a speed test prior to the 7 am boarding group distribution if you aren’t sure which is quicker for you!

Ever since this Star Wars themed attraction opened at the Star Wars: Galaxy’s Edge lands on both coasts, it has been immensely popular and boarding groups have been coveted.

While Disneyland remains closed, Disney World is currently operating at a maximum capacity of 25% during its phased reopening process. This has likely played a role in the immense popularity of Disney’s Hollywood Studios theme park — Guests, presumably, think it will be much easier to ride RotR now than it would have been before the Resort’s temporary coronavirus closure earlier this year.

It is also worth noting that plexiglass dividers were recently added to all of the Rise of the Resistance ride vehicles (escape pods). These allow two parties to be seated in a single ride vehicle, potentially allowing for more boarding groups on a daily basis. Disney has not confirmed that additional boarding groups will be added, but it serves to reason that this was the logic behind the new health and safety protocol being taken.

What are your thoughts on these new Rise of the Resistance boarding group times? Do you think 7 am is a better option than 10 am for rides that have virtual queues?