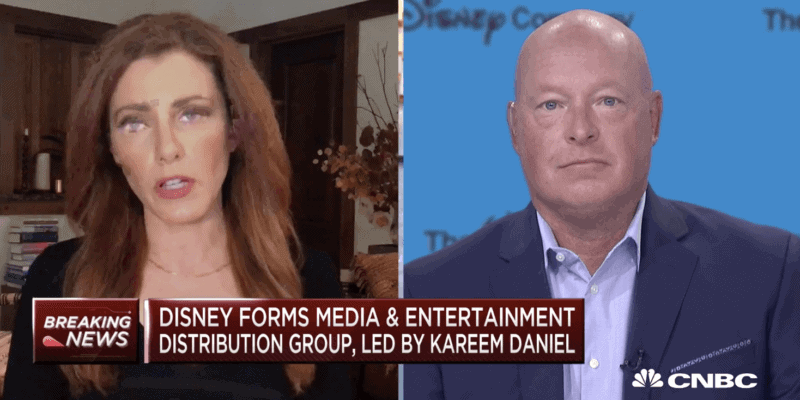 Following today’s announcement that The Walt Disney Company will be reorganizing their structure to focus primarily on the Disney+ streaming platform, Disney CEO Bob Chapek spoke to CNBC about not only this shift in priorities but also about Walt Disney World over three months into its phased reopening process.

Many Disney World Guests have recently taken to social media to showcase the crowd levels at the Florida theme park. It seems, from many photos and first-hand accounts, that crowds are significantly larger than they were during the initial reopening period in mid-July.

It’s true that the parks are more crowded than they were back during the first month of reopening this summer. But is it because of an increase in capacity? Not so, according to CEO Chapek. Reporter Danielle DiMartino Booth shared this Tweet that reads:

While ride wait times and general crowd levels in the parks seem to indicate otherwise, it is entirely possible that Disney hasn’t increased the capacity of Disney World’s four theme parks — Magic Kingdom, EPCOT, Disney’s Animal Kingdom, and Disney’s Hollywood Studios. Instead, the longer wait times and higher crowd levels indicate that families are becoming increasingly comfortable with visiting the parks, so they are actually reaching their limited capacity on a more regular basis than they previously were.

Just a few weeks after Walt Disney World Resort reopened over the summer, Disney executives addressed crowd levels. At that time, fewer people than Disney had expected were traveling to visit the Florida theme parks. So since then, it appears that more people have decided to go to the Most Magical Place on Earth — though capacity remains the same as it has been.

The official Disney World website features this health and safety notice, which is important to heed if you plan to visit the Disney Resort any time in the near future for Halloween or holiday season activities:

• We have taken enhanced health and safety measures. An inherent risk of exposure to COVID-19 exists in any public place where people are present. View important details.

• Certain parks, hotels, restaurants and other offerings may be modified or unavailable, limited in capacity and subject to limited availability or closure, and park admission and offerings are not guaranteed. View important details.

• To enter a park, both a park reservation and valid admission for the same park on the same date are required for Guests ages 3 and up.

What are your thoughts on Bob Chapek’s remarks regarding Disney World’s current capacity?