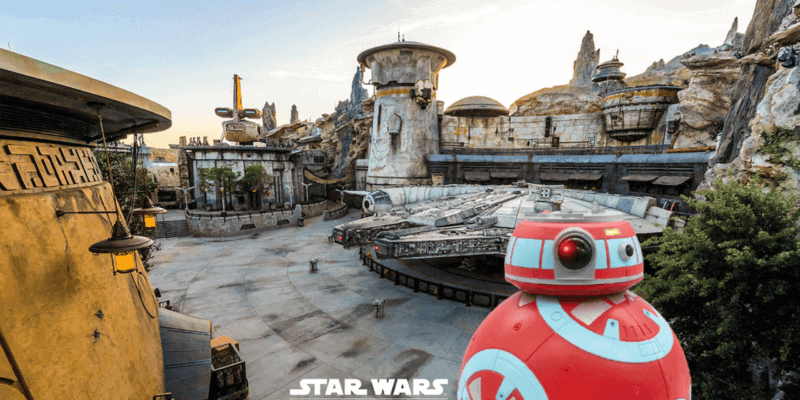 Yesterday, during a Star Wars Galaxy’s Edge panel (Storytelling Through Merchandise) at the D23 Fantastic Worlds Celebration, we got our first look at some of the new merchandise coming to Star Wars: Galaxy’s Edge.

In the video, we get a bit of a recap of the work that the team put into Galaxy’s Edge from a merchandise perspective and how it helps to tell the story of the land and brings Guests into the world of Star Wars. It’s always great to see behind the scenes of how some of the lesser-known teams at Disney drive storytelling just as much as the Imagineers responsible for the creation of the land and attractions.

The team reveals how the project came about, dating back to 2013 and preparing a presentation on what kind of merchandise could exist in a “Star Wars land” as well as the challenges involved in keeping such a big secret from the world.

The panel — consisting of Brad Schoeneberg, Tracie Alt, and John Cody Hampton from the Disney Parks Merchandise team — then goes into a bit more detail on future merchandise we can expect to see at Galaxy’s Edge, revealing new droid and lightsaber variants.

The new legacy lightsaber hilts include Obi-Wan Kenobi’s, the repaired Skywalker lightsaber, and Ben Solo’s lightsaber from the time he was a Jedi (before he turned to the dark side and took the name Kylo Ren). Gold D23 members will have the chance to order these from shopDisney on November 19th before they go on sale to the general public on November 25th.

Those who have seen all of the Star Wars animated shows will recognize this little droid from Star Wars Resistance. The droid has feminine programming and has flown alongside Commander Poe Dameron while BB-8 was stationed elsewhere. The droid has appeared in over 20 episodes of the show!

For those of you who are super interested in how the merchandise team came up with some of the ideas for Batuu, we’d highly recommend watching the entire panel below. It has some fantastic moments in it that include how they drew direct inspiration from the Star Wars movies and shows!

Are you going to be purchasing any of the new Galaxy’s Edge merchandise? Let us know in the comments below!