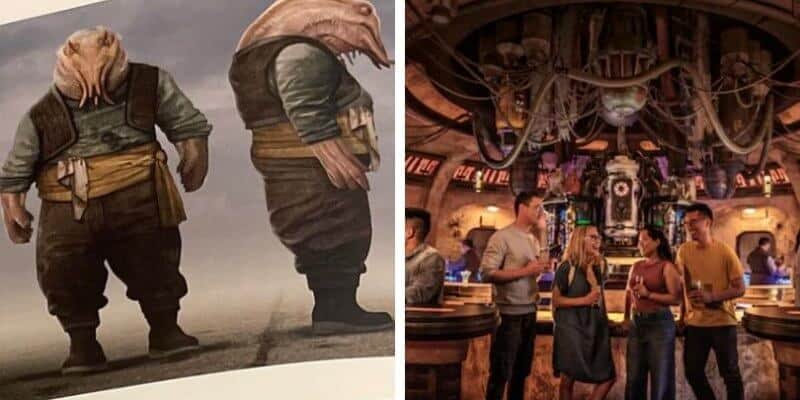 Oga’s Cantina, located at Star Wars: Galaxy’s Edge at Disneyland Park in Disneyland Resort and Disney’s Hollywood Studios in Walt Disney World Resort, is certainly a fan-favorite spot. Ever since it opened up its doors, Guests make visiting Oga’s Cantina a must-do every single time they are on Batuu.

But, as we all know, Disney Imagineering goes through dozens of concepts before they land on the final version of any Disney Parks experience. So, what did the early concept ideas look like for the bar? Well, they included bartenders with pig faces and a giant creature living inside a water tank behind the bar!

If you aren’t familiar, Oga’s Cantina is the local watering hole in the Star Wars films and in both Star Wars-themed lands, Star Wars: Galaxy’s Edge, in Disneyland and Disney World.

Oga Garra, the owner of Oga’s Cantina, is also a local crime boss who controls the underworld within the Black Spire Outpost village. In the film, Oga’s Cantina is located on the Star Wars planet of Batuu, which is also the setting for Star Wars Galaxy’s Edge in both theme parks.

The cantina offers drinks such as the Fuzzy Tauntaun, The Jedi Mind Trick, and the Bespin Fizz, all of which are fan favorites!

“The Art of Star Wars: Galaxy’s Edge,” written by Nerdist managing editor Amy Ratcliffe, is a newly-released book that gives Star Wars fans an inside look at how Galaxy’s Edge came to be. It includes making-of details from Walt Disney Imagineering and Lucasfilm executives and artists.

Within the book, there is a section on this notorious watering hole, which goes into details of the first concept art of Oga’s as well as what was initially supposed to be included in the bar!

For starters, Doug Chiang explained how Oga’s Cantina was going to have a big creature living in a tank behind the bar, who would have been the owner. However, due to technology and resources, that idea could not come to life. Per Orlando Sentinel:

An early idea, Chiang says, was a big creature living in a tank behind the bar. That was the owner.

“It was going to be an animatronic in the water. It would’ve been fantastic,” Chiang says. “It was one of those sad moments where it was a great idea; we just didn’t have the technology or the resources to do it at this time.”

It’s too bad technology and resources worked against the Imagineers because having a gigantic animatronic living in a tank of water behind the bar would have been incredible, don’t you think?

In reality, the owner of Oga’s Cantina is Oga Garra, who has her own fascinating backstory — including a beef with a rival cantina owner, Seezelslak. The official Star Wars website features this description of Oga:

The elusive local crime boss of Black Spire Outpost on Batuu, few have seen Oga in the flesh and have lived to tell the tale. She has earned an infamous, almost mythical reputation among smugglers, criminals, and prominent figures of the underworld. Even the mere mention of her name sets the locals on edge. Many local Batuuans wonder whether she’ll finally make an appearance now that the First Order has arrived on Black Spire Outpost, but she remains hidden, preferring to run her cantina and the outpost in the shadows.

The overall interior design is based on a Ralph McQuarrie’s sketch for Jabba the Hutt’s palace. “We took Ralph’s painting and painted in our characters; it was an early painting that he had done for Jabba’s throne room that didn’t get used,” Imagineering executive creative director Chris Beatty says. “We had seen it in the [Lucasfilm] Archives, and we love d the feel of the space. So Erik had Rick [Lim] paint in our cantina elements, but three quarters of that painting is actually Ralph’s. It’s cool that Ralph actually had a hand in Galaxy’s Edge, all these years later, because the cantina’s interior was really designed by Ralph McQuarrie, when you look at his art and the space side by side”.

If you ever visited Oga’s Cantina, you, of course, know DJ R-3X — the droid who was reprogrammed from “piloting” the Starspeeder 3000 for Star Tours to now entertainer and DJ for the watering hole. Well, what if we told you that Imagineers were also thinking of having animatronic bartenders? Per the new book:

“We slowly started to peel back the layers of reality, figuring out how we could achieve an alien bartender,” says Doug Chiang, Lucasfilm vice president and executive creative director. “We knew that if it was a cast member wearing a suit, it would be a lot of prep and not the most practical way to go about it, so maybe the better way was to have an animatronic bartender.”

As you can see in the concept art below, which includes a graphic of Oga Garra’s final form, the team cycled through a number of ideas before the Oga’s Cantina we know and love came to be!

Oga Cantina’s is certainly a hot spot for Disney Guests at Walt Disney World and Disneyland, but this book just goes to show that original concept art and ideas are just that — So much has changed as Imagineers work hard on bringing certain IPs to life and we absolutely love the way Oga’s Cantina turned out. (Though we have to admit, having animatronic bartenders would have been out-of-this-world).

You can purchase “The Art of Star Wars: Galaxy’s Edge” by clicking here.

What do you think of this original concept art? What do you wish Imagineers went through with and brought to life? Let us know in the comments below.

Do you want to visit Oga’s Cantina on your next Disney vacation? Let our friends at Academy Travel help you plan! Get started with a free quote today.