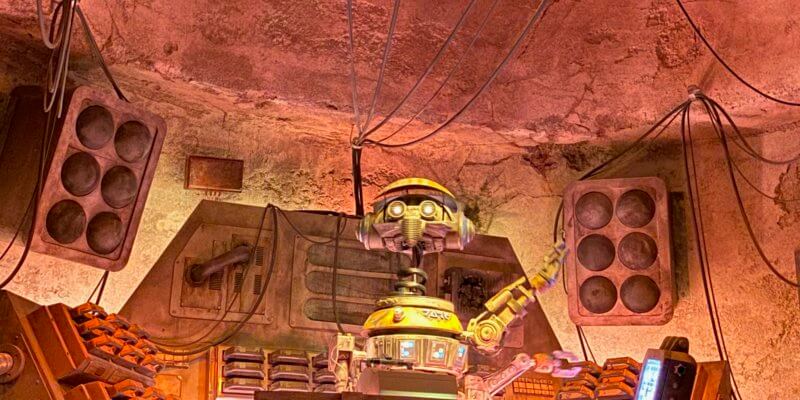 So I’ve just got back from a 3-week trip to Walt Disney World and Universal Orlando where I visited Star Wars: Galaxy’s Edge for the very first time. In the first of a series of reviews of the land, I thought I’d share some thoughts on why Oga’s Cantina is the highlight of Galaxy’s Edge.

We were lucky enough to visit Oga’s Cantina three times during our stay and will never forget the first time we walked into the bar. It’s everything we wanted it to be. Guests were talking and laughing, music from DJ Rex was blasting out, and the bar itself is decorated to perfection. You could think you were literally inside a film set, it’s that good.

We sat at the bar and there are drinks bubbling away everywhere, a strange-looking creature sat in a tank above the bar and despite the drinks coming mostly pre-made, the way the bar is set up is exactly how you’d imagine a Star Wars-themed bar to be.

While it first it is a little odd to walk into a Star Wars cantina and not hear the Cantina Band song play in the background, DJ Rex (of original Star Tours fame) plays quite a varied set that really adds to the feeling that you’re on a distant planet. We found ourselves dancing to a lot of the tunes that Rex plays throughout our time in the Cantina — Disney has done a fantastic job here.

Don’t worry, a remixed version of the Cantina Band song is there, and you will likely hear it during the 45 minutes you’re currently allowed to stay within the establishment.

Let’s talk about what many consider the main reason why Disney built Oga’s Cantina: to serve you expensive drinks! During the three stops made at Oga’s Cantina, we tried a lot of the alcoholic (and non-alcoholic) options and the only negative we found was the price.

That being said, everything from the basic beers and creative cocktails like the Bespin Fizz, Jedi Mind Trick, and Fuzzy Tauntaun all taste incredible.

And before you ask, yes we did purchase the Rancor Tooth Beer Flight Board and it’s now sitting proudly on a shelf, it’s well worth the price point if you’re a huge Star Wars fan.

While Oga’s Cantina only serves basic bar snacks, they aren’t the nuts you’d expect to see at any other bar. Even the food looks like it has come from a Galaxy Far Far Away, the Batuu Bits tasted amazing and we’d 100% get them again.

So were there any downsides?

While we absolutely loved Oga’s Cantina, the bar is full to the brim with guests, so close that you are pretty much touching strangers as you try and enjoy your drink. Hopefully, Disney starts to restrict entry a little bit more as the land starts to settle in as it can be pretty uncomfortable, especially if you aren’t stood at the bar and are at one of the tables within the Cantina.

The pricing is less of an issue. It’s easy to research that before heading into the bar. But the lack seats is a bit of an issue for guests who are unable or uncomfortable standing for long periods of time. It’s possible to grab a seat if you’re super lucky, but they are hard to come by and you will be sitting with people you don’t know.

Negatives aside, Oga’s Cantina is one of the best experiences we’ve done at Walt Disney World and is an essential place to stop for any Star Wars fan.

If you’re interested in booking a trip to a Galaxy Far Far Away, then make sure you head on over and contact our friends over at Academy Travel! The Authorized Disney Vacation Planners at Academy Travel will help you and your family plan every aspect of your Disney trip. Click here for your no-obligation vacation quote from Academy Travel.

Have you been to Oga’s Cantina? Let us know what you think of it in the comments below!