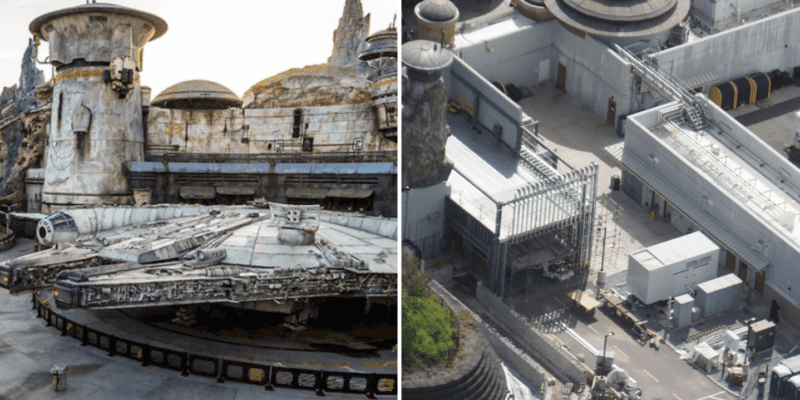 Although the opening day of the Star Wars: Galactic Starcruiser hotel at Walt Disney World Resort has officially been pushed back to 2022, progress on the first-of-its-kind Disney Parks Resort is continuing on a daily basis.

The Starcruiser was originally announced at the 2017 D23 Expo in Anaheim, California, and was slated for a 2021 opening before the COVID-19 pandemic impacted construction.

Most recently, Twitter user Bioreconstruct shared images of how the Star Wars: Galaxy’s Edge land at Disney’s Hollywood Studios Park is undergoing changes to make way for Galactic Starcruiser Guests who will be taking a “port excursion” to Batuu.

Related: Everything We Know About Guardians of The Galaxy: Cosmic Rewind

Aerial photo today, and in park photo yesterday, of the transport shuttle terminal in Batuu. For guests of Star Wars Galactic Starcruiser hotel.

Although we don’t yet fully know how the excursion to Black Spire Outpost will be woven into the Galactic Starcruiser storyline, we do know that booking passage on the Halcyon luxury starliner will grant Guests access to both of the popular Star Wars rides at Galaxy’s Edge — Millennium Falcon – Smugglers Run and Star Wars: Rise of the Resistance.

Riding Rise of the Resistance without having to obtain a boarding group in the attraction’s virtual queue system is a huge perk for Galactic Starcruiser passengers.

As we can see from the photos [above], immersion will not be broken as the Starcruiser’s themed space shuttles — buses, in reality — transport Guests to Galaxy’s Edge from the Star Wars hotel and back again. They will disembark on Batuu and won’t see the rest of the Hollywood Studios theme park.

It is important to note that, at this time, none of the changes that are being made to Galaxy’s Edge will impact Guests — construction is occurring behind the gates photographed by Bioreconstruct.

Bioreconstruct also shared a photo of where Guests will board their transport shuttles at the Starcruiser site. The caption reads:

From the photo [above], it appears that Guests will wait in the small waiting room, then walk down a hallway similar to a jetway to get on their shuttles. This means they will not see the outside world at all while they travel to Batuu.

In “The Art of Star Wars: Galaxy’s Edge” book, writer Amy Ratcliffe spoke to several Walt Disney Imagineers who have been working on the Starcruiser. They shared details about the brand new droid that will “drive” the transport shuttles.

The description of the driver droid, named Rex VO3A, by Imagineering reads:

“This is the droid that drives the shuttle back and forth from Batuu up to the ship. She’s actually not of the Halcyon, she is of the transport that is operated out of Black Spire Outpost.”

The level of detail that has gone into every aspect of the Starcruiser’s design — down to making sure the interior matches the color scheme of the Chandrila Star Line, popular Star Wars characters are featured, and every astromech droid has a backstory — is sure to make for an unbelievable experience for Star Wars fans of all ages.

Stay up-to-date on the latest Star Wars: Galactic Starcruiser news on the new Disney World Resort hotel’s official webpage. Please note that reservations are not available at the time of publication. You can, however, learn about dining options, lightsaber training, and other onboard experiences.

Are you looking forward to blasting off to a galaxy far, far away on the Star Wars: Galactic Starcruiser?