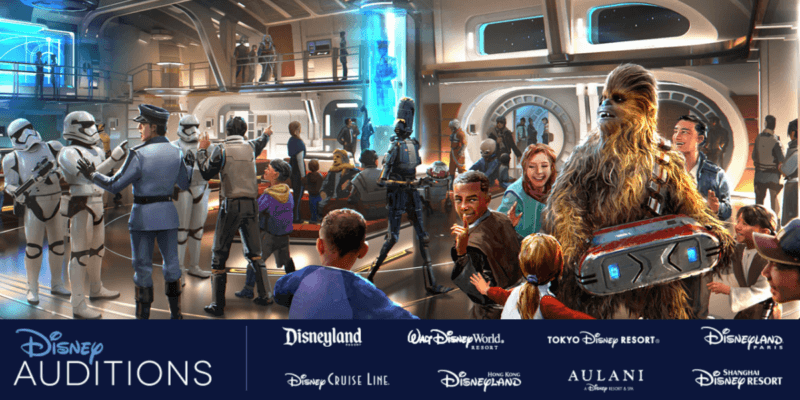 Today, on National Star Wars Day, Disney announced that its newest, and most ambitious, hotel, the Galactic Starcruiser would be opening at the Walt Disney World Resort in Florida in 2022. This hotel will fully immerse Guests in the Star Wars world the minute they step through the doors.

When the Launch Pod’s airlock slides open, you’ll take your first step into a galaxy far, far away as Star Wars: Galactic Starcruiser comes to life all around you. During your stay aboard this glamorous ship, you may interact with an eclectic group of characters both familiar and new, possibly including the starcruiser’s strong and charismatic captain, a plucky ship’s mechanic and a galactic superstar who can captivate an entire room with the crook of one jewel-encrusted purple Twi’lek finger.

If that isn’t exciting enough, Disney is now giving you a chance to become a part of this new Star Wars hotel experience! Disney Auditions is casting numerous roles for the Galactic Starcruiser hotel.

Below are just some of the roles that Disney is looking for in its newest hotel. You can see the complete list and see how you can sign up by visiting the Disney Careers website and clicking here.

Let’s take a look at some roles Disney is looking to fill on the Halcyon, the name of the new Star Wars ship.

Seeking a mature, commanding actor with strong improvisational abilities to portray the Halcyon’s Captain. She is a worldly Pantoran (40s-50s) with a rich, diverse history and dedication to her vocation. She is a strong and charismatic leader who has served as a well-respected ship commander for some time and demands the attention and focus of every room she walks into.

Seeking a confident and engaging actor with strong improvisational abilities to portray The Fixer. Character portrayed is a well-traveled, devil-may-care human (40s). A convincing and handsome schemer, he uses his charm to his advantage as he seeks out associates to enlist in his criminal enterprise. His calculated and conniving approach is an intellectual dance; a paso doble that leaves passengers wondering… was he the bull or the matador? Actors with sleight of hand tricks a plus and are encouraged to prepare a demonstration of abilities.

Seeking warm and engaging athletic actors with improvisational abilities to serve as Saber Trainers. Character portrayed is in their 20’s-30’s. Patient and well-composed instructors, Saber Trainers serve as expert wielders of the lightsaber and he/she/they take cruisers through a physical demonstration. Prior sword/saber experience a plus as the role requires the ability to confidently brandish a lightsaber. Only talent local to the Central Florida area will be considered.

If you wish to audition for these new roles on the Galactic Starcruiser, Disney gives step-by-step instructions on how to do so.

For those actors and actresses who find themselves more interested in a singing and dancing role, Disney is looking for you as well! They are casting several more musical roles to fill at the Star Wars: Galactic Starcruiser hotel.

Seeking a youthful and friendly actor/guitarist/singer with strong improvisational acting abilities to portray The First-Time Cruiser. Character portrayed is a Togrutan (20s) who aspires to be more than the “alien next door”. This hopeless romantic is a friendly and earnest musician who happily serenades his fellow guests as he aspires to impress the Galactic Superstar. He is a strong rhythm guitarist with a happy go lucky, easy going musical style.  A struggling singer/songwriter looking for his big break. Vocal range low C to high A; Low tenor/high baritone.

Seeking an actor/vocalist with strong improvisational abilities to portray our Galactic Superstar. Character portrayed is a Twi*lek (30s-40s) who commands respect and flame-roses at her feet. Operating in a legally-dubious world of galactic intrigue while fighting for her race’s integrity and freedom, she is also a phenomenally soulful singer who demands focus in every conversation and performance alike. Her vocal range is preferably that of a Mezzo Soprano and her musical style is a hybrid of neo-soul, jazzy, funk, colored by her extensive travel and experiences.

For those actors and actors with musical aspirations, below are the steps that are to be taken to audition for the musical roles.

Rounding out the wave of roles that Disney is seeking to fill are the actors who have more experience on the stunt and combat side of things. Star Wars films are action-packed, and the Galactic Starcruiser hotel will work to keep up that experience for the Guests.

With these roles, Guests will be able to see in person, characters from the Star Wars film franchise that they recognize. For the roles of stunt and combat actors, those chosen will play the roles of Kylo Ren, the villain of The Force Awakens, The Last Jedi, and The Rise of Skywalker, and Rey, the hero of the same three films.

For the role of Rey, Disney is looking for the following:

Seeking a dynamic and athletic actor with an athletic, slender build and strong improvisational abilities to portray Rey. Rey is a survivor, toughened by her life as a scavenger on the harsh desert planet of Jakku. Despite dismissing herself as a “no one”, she learns that her life is being shaped by the mysterious power of the force. Actors with prior experience or knowledge in stage combat, Wushu, martial arts or hand-to-hand are encouraged to attend.

When it comes to Kylo Ren, here is what those who wish to audition can expect:

(6’0”-6’2”) Seeking a dynamic and athletic actor with improvisational abilities to portray Kylo Ren. A menacing Force-sensitive warrior, Kylo is driven by his connection to the dark side to achieve his ultimate goal of galactic domination. Actors with prior experience or knowledge in stage combat, Wushu, martial arts or hand-to-hand are encouraged to attend.

For actors and actresses who dream of playing the new trilogy’s main characters, here is how you can apply:

All of these prestigious roles will certainly attract some top talent. For all of those who audition, good luck, and may the Force be with you!

Will you be seeking one of these brand-new roles at the Walt Disney World Resort? Let us know in the comments!