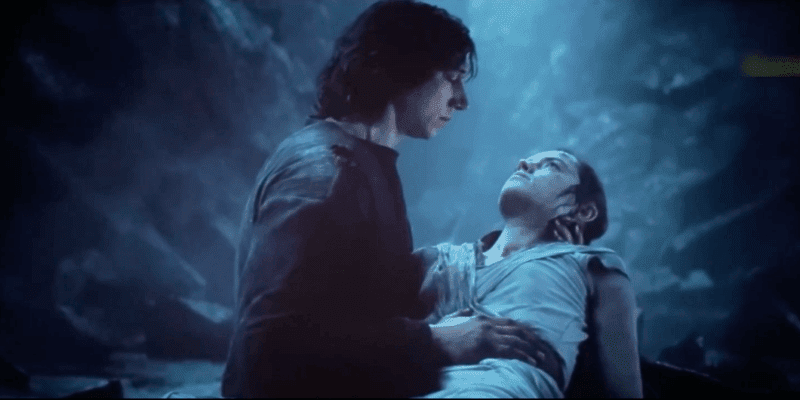 When Star Wars fans were first introduced to Supreme Leader Snoke’s right hand, Kylo Ren/Ben Solo (Adam Driver), and an unlikely heroine, Rey (Daisy Ridley), in Star Wars: Episode VII – The Force Awakens (2015), it was clear that the duo had a special connection.

Intriguingly, Ben Solo’s parents, Han Solo (Harrison Ford) and Princess General Leia Organa (Carrie Fisher) both seem drawn to Rey, independently of one another. They, perhaps, sensed the connection the scavenger from Jakku has to their wayward son. Certainly Force-sensitive Leia had to feel the duo’s intense bond early on in the Star Wars sequel trilogy.

Even Solo’s uncle, Jedi Master Luke Skywalker (Mark Hamill) ultimately trains Rey in the ways of the Force on Ahch-To.

Throughout the sequels — The Force Awakens, Star Wars: Episode VIII – The Last Jedi (2017), and Star Wars: The Rise of Skywalker (2019) — Kylo Ren and Rey’s connection to one another only intensifies. Eventually, it becomes clear that the two are a Force dyad.

At one point in The Rise of Skywalker, Emperor Palpatine (Ian McDiarmid) explains:

The life force of your bond, a dyad in the Force. A power like life itself. Unseen for generations. And now, the power of two restores the one true Emperor.

Although Star Wars fans did not, at the time, know exactly how long it had been since such a strong dyad in the Force had been seen, it appears that the new Lucasfilm High Republic publishing initiative might have provided at least the beginning of the backstory.

Who was part of the earlier Force dyad?

The High Republic era — which is now officially part of the revamped Star Wars timeline — is set approximately 200 years prior to Star Wars: Episode I – The Phantom Menace (1999). This places it about 260 years before the sequel trilogy.

This means that Kylo and Rey could never have met the duo who were part of the earlier Force dyad that is currently being set up.

Related: After 40 Years,’Star Wars’ Finally Reveals What the Force Looks Like

This particular potential dyad involves Zeen Mrala, who is secretly Force sensitive despite having been raised to be afraid of the Force, and Jedi Padawan Lula Talisola, who is being trained by Master Yoda.

In the new IDW Publishing High Republic comic book series, Master Yoda and his Padawans are dispatched to the Trymant planetary system to provide assistance following the Great Disaster — the event that serves as the driving force behind Phase I of the High Republic initiative. ScreenRant shared what occurred between Zeen and Lula:

…one page [of the comic] in particular melds the internal narration and monologues of both Lula and Zeen, and they end up working together as one, Lula deflecting the blaster bolts being fired by the Nihil while Zeen unleashes her power in the Force to keep a hunk of falling debris from hyperspace from destroying them all. As such, the possible implication exists that the pair could be a Force dyad.

While we don’t know for sure that this is the Force dyad that Palpatine was talking about in the final Skywalker Saga film, it seems likely. Dyads in the Force remain incredibly rare in Star Wars lore and the fact that he specifically noted it had been generations since such an intense connection existed makes it even more likely that he was referencing a long-ago era, such as the Golden Age of the Jedi Order.

For those unfamiliar with exactly what a Force dyad is, Wookieepedia has shared the following details:

The power of a dyad was as strong as life itself, and the individuals who formed a dyad shared a connection that spanned across space and time.

Those in a dyad possessed rare Force powers such as Force healing. This ability allowed them to heal wounds and even resurrect the deceased, but it required the transference of their own Force energy and was, therefore, potentially lethal to the healer. In addition, dyads were attuned to each other’s senses, including what they saw, heard and felt.

In the latter situation, the sequel trilogy heroine was not only able to heal the lightsaber wound Solo had just sustained, but the scar on his face from The Force Awakens as well. This all, of course, plays into Kylo Ren’s redemption within the Star Wars universe.

Then, at the end of the Skywalker Saga, after Palpatine/Sith Lord Darth Sidious had been defeated once and for all — but not without great cost — Solo uses the remainder of his life force after the battle to resuscitate Rey, proving their powerful bond quite literally until the end of his life.

As Zeen and Lula’s story continues, it will be interesting to see if Lucasfilm’s writers delve deeper into their potential Force connection, potentially across vast distances. It is, thus far, is seemingly as intense as anything we’ve ever seen.

Could Rey and Ben Solo show up again?

While Daisy Ridley has made it clear that she was satisfied with Rey’s ending within the Star Wars franchise — she becomes Rey Skywalker and walks off into a double sunset on Tatooine — rumors of Ben Solo’s return have surfaced periodically.

This is largely connected to the timeline of Jon Favreau and Dave Filoni’s hit series, The Mandalorian. The show is set about 25 years prior to The Force Awakens, which means it could theoretically showcase young Solo around the time he burned down Luke Skywalker’s new Jedi Academy.

There have, in fact, been rumors that Solo might have even killed Grogu (AKA Baby Yoda) in the blaze. Death is, of course,  one way to explain why the incredibly Force-sensitive creature never aided Rey or the Resistance throughout the sequel films.

There are other explanations, however, that have nothing to do with Kylo Ren.

Potentially, for example, The Mandalorian saga could eventually have Grogu leave the Jedi to return to bounty hunter Din Djarin (Pedro Pascal). He could also team-up with Ahsoka Tano (Rosario Dawson) in some fashion. Tano officially left the Jedi Order in the animated series Star Wars: The Clone Wars and was operating independently when she met Djarin and his foundling in The Mandalorian Season 2.

At this time, nobody knows for sure what the future holds within Favreu and Filoni’s little corner of the Star Wars universe — but we can’t wait to find out.

What do you think? Are you intrigued by the Force bond shared by Kylo and Rey and, seemingly, Zeen and Lula? Do you think a young Ben Solo will ever appear in The Mandalorian or its spinoffs?