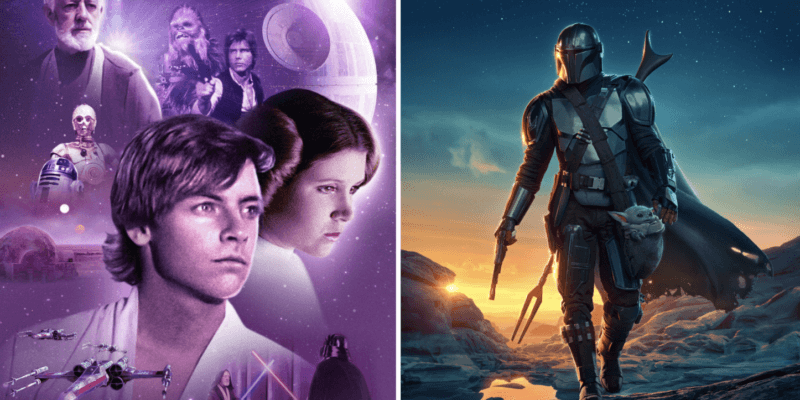 Star Wars is one of the most influential and popular franchises of the last 100 years, with nine Skywalker Saga movies, two standalone films — Rogue One: A Star Wars Story (2016) and Solo: A Star Wars Story (2018) — books, and numerous TV shows echoing and expanding upon George Lucas’s original “space opera” saga. Last Friday marked both the one-year anniversary of Star Wars: Episode IX – The Rise of Skywalker (2019) releasing in theaters and the Season 2 finale of the hit Disney+ series The Mandalorian.

The floodgates of proud Star Wars fans reopened for the first time since 1983 (the release of Star Wars: Episode VI – Return of the Jedi), as many posted on social media with the phrase, “A happy Star Wars fan.” One fan, in particular, popular YouTuber Justin Scarred (a massive fan of the original Star Wars trilogy), posted a passionate response after viewing The Mandalorian’s second season finale.

THIS IS THE WAY. @starwars making believers out of old fans again. No spoilers BUT GO WATCH THE MANDALORIAN FINALE NOW! ? @jonfavreau & @dave.filoni … Thank you.

Instagram user Star Wars Parallels shared a side-by-side graphic of Luke Skywalker with his own father, Darth Vader, and Grogu with Djarin, writing:

“Just for once…let me look on you, with my own eyes.”

A post shared by The Parallels of Star Wars (@starwarsparallels)

Fans of all Star Wars generations — the prequel trilogy, original trilogy, and most recent sequel trilogy — were all included in The Mandalorian’s season finale, and for once, there was peace amongst the galaxy.

It’s not a secret that the Star Wars sequels — The Force Awakens, The Last Jedi, and The Rise of Skywalker — were not particularly popular among many Star Wars fans. While some enjoyed the three films after Disney acquired Lucasfilm in 2012, social media became the battleground between new and old Star Wars fans.

Much like the galactic divide, you had to choose between fans of either the three trilogies — no double-dipping.

Actresses Daisy Ridley (Rey) and Kelly Marie Tran (Rose) were chased off from Instagram after fans began blaming them for “ruining Star Wars,” and writers/directors J.J. Abrams and Rian Johnson were dismissed by many as “destroying” the series. From then on, Star Wars was a toxic and unfriendly topic to share your own opinions on.

Do or Do Not

After the sophomore season Mandalorian finale, Star Wars fans of all generations were united. The Mandalorian touched on many overarching themes from Star Wars, including Order 66 from the prequel trilogy timeline, the struggle between the Empire and the Rebellion from the original trilogy, and hinted towards the future shown in the sequel trilogy with the beginning of the rise of the First Order.

The Mandalorian creator Jon Favreau and executive producer Dave Filoni “saved” Star Wars, and that’s not being overdramatic. Amid the division within the fandom, many Star Wars fans had begun to lose their spark for the franchise, as they felt it lacked originality and strong storytelling with the most recent films.

Then, The Mandalorian lit the spark that became the fire under Star Wars fans — to quote Poe Dameron (Oscar Isaac). Favreau and Filoni’s Mandalorian brought something new to Star Wars while still infusing nostalgia into the storyline, not focusing primarily on either.

Fans are praising the two for their efforts and can’t wait to see what comes next.

Taking a massive risk, Filoni and Favreau went back to the original timeline of Star Wars — The Mandalorian takes place about five years after the defeat of the Empire in Return of the Jedi — but has injected a brand new story into the middle of an old and beloved one. Those who grew up with George Lucas’s original trilogy were instantly satisfied with the addition of Boba Fett (Temuera Morrison) and Luke Skywalker (CGI Mark Hamill). Tatooine was revisited but looked utterly new at the same time — thanks, in large part, to Marshal Cobb Vanth (Timothy Olyphant) and Peli Motto (Amy Sedaris).

New fans who were unsure of what occurred before the heavily publicized sequel trilogy entered the Star Wars universe got small pockets of “catch-ups” through dialogue, while longtime fans enjoyed the ‘Easter eggs’ hidden throughout the story — Sarlacc pit, anyone?

Favreau and Filoni have managed the near-impossible. They’ve successfully honored the past while making a new Star Wars future. For instance, basing the Krayt Dragon’s howl on Ben Kenobi’s shriek to the Tusken Raiders in Star Wars: Episode IV – A New Hope — a small and maybe unnoticeable touch — highlights what the two showrunners do best: balancing.

Luke Skywalker, perhaps the most vital piece of connecting the past to the future of the Star Wars universe, didn’t make an official appearance until the end of Season 2. Along the way, Ashoka Tano (Rosario Dawson) and Mandalorie’s Bo-Katan Kryze (Katee Sackhoff) made a slow entrance — alongside Boba Fett, Order 66, the Galactic Civil War, and recognition of Anakin Skywalker’s betrayal.

Nothing was shoved in your face or forced, so Star Wars fans were instantly hooked and refound their love for the franchise. Six-year olds and 60-year olds now share a common passion for Mando and The Child, as well as being satisfied with their own Star Wars interests.

Granted, they had numerous hours over two seasons to achieve this feat, rather than a 2-hour runtime in a film to shove all of this in an audience’s face.

All in all, The Mandalorian is to thank for peace within the galaxy once more. And now, we’re losing sanity waiting for The Mandalorian Season 3 and The Book of Boba Fett.

What has The Mandalorian done for Star Wars? Let us know in the comments below!

Comments Off on How Nostalgia Saved Disney’s ‘Star Wars’