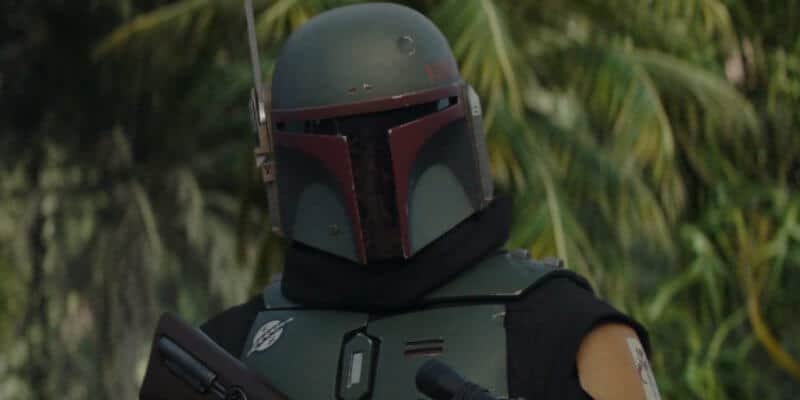 If you are not yet caught up on The Mandalorian, stop reading — Spoilers ahead.

The upcoming series — which Favreau confirmed will be a separate project from The Mandalorian Season 3 — was announced during a post-credits scene in which Boba Fett (Temuera Morrison) and Fennec Shand (Ming-Na Wen) took over Jabba the Hutt’s former palace on Tatooine.

Fett killed Bib Fortuna and took Jabba’s throne, insinuating that this next chapter in his story will feature the iconic bounty hunter working with the galaxy’s criminal underworld.

“At the end of the show, Boba Fett came out and it said ‘The Book of Boba Fett Coming December 2021,’ and that wasn’t part of the big Disney announcement [Walt Disney Company Investor Day on December 10], but here’s the logo. We wanted to hold this back because we didn’t want to spoil the surprise of all the shows when Kathleen Kennedy was up there and so they let me keep this one a secret.
So this is actually separate from The Mandalorian Season three. but what we didn’t say in that announcement is that the next show coming up, Kathy said the ‘next chapter’ and that’s going to be the Book of Boba Fett and then we go into production right after that on Season three of The Mandalorian back with the main character that we know and love.”

The logo was clearly inspired by Fett’s famous green Mandalorian armor that originally belonged to his father, Jango — or, as Koska Reeves (Sasha Banks) shot back in the Season 2 finale, “Don’t you mean donor?” The barb was meant to remind Fett that he is, in fact, a clone.

The armor has evolved since its first canon appearance in Star Wars: Episode V – The Empire Strikes Back (1980). In fact, between The Mandalorian Chapter 14: The Tragedy and Chapter 15: The Believer, the armor was seriously cleaned up.

Favreau didn’t share details about the new Boba Fett-centric series, but did say it will be within the same timeline as The Mandalorian — this means it will not be a prequel series about Fett, as previously rumored.

Some thought Lucasfilm would focus on the era between Star Wars: Episode VI – Return of the Jedi (1983) and The Mandalorian — which takes place about five years later — finally explaining how Fett escaped from the Sarlacc pit he tried to throw Han Solo (Harrison Ford) into for unpaid debts to the Hutts.

Favreau did not officially confirm that he will be doing this Disney+ show with Dave Filoni, but did call Filoni “my writing partner” and confirmed that his Mandalorian co-executive producer is currently writing Ahsoka, another Mandalorian spinoff that was announced during Lucasfilm’s portion of Disney’s Investor Day event.

It is not yet known exactly how Ahsoka — featuring Rosario Dawson reprising her live-action appearance as the Star Wars Rebels and Star Wars: The Clone Wars‘ fan-favorite character — and a second Mandalorian spinoff, Rangers of the New Republic, will interconnect with The Book of Boba Fett.

You can watch the full video of Favreau’s Good Morning America interview below:

Are you looking forward to The Book of Boba Fett now that Jon Favreau has officially unveiled the logo?