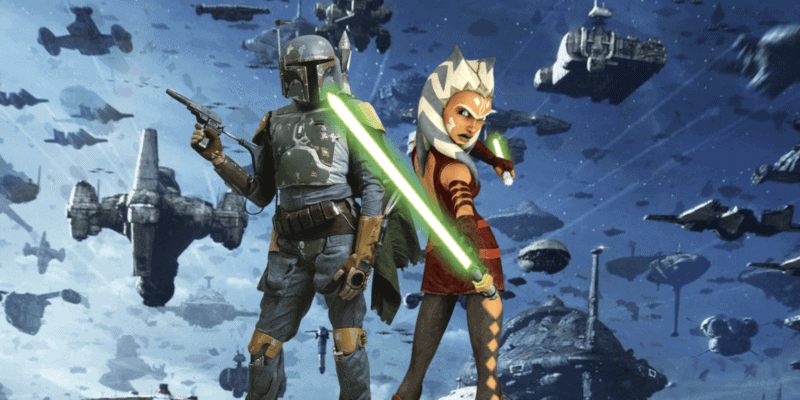 If you had to guess a single Star Wars character who has appeared in every canon medium, you would probably land on an icon the likes of Luke Skywalker (Mark Hamill), Darth Vader (David Prowse/James Earl Jones), Leia Organa (Carrie Fisher), Chewbacca (Peter Mayhew/Joonas Suotamo), or a droid, such as C-3PO (Anthony Daniels) or R2-D2 (Kenny Baker/Jimmy Vee).

You would, surprisingly, be incorrect. Good thing this isn’t Jeopardy.

The answer — in the form of a question — is, “Who are Ahsoka Tano and Boba Fett?”

This is interesting for a few reasons. First, neither character plays a “major” role in the Star Wars universe in the traditional sense — and yet, they’ve both made an indelible mark on a galaxy far, far away.

Ahsoka — who just made her live-action debut in The Mandalorian (played by actress Rosario Dawson) — was created by Dave Filoni and Star Wars creator George Lucas for the Star Wars: The Clone Wars (2008) movie — in which she was voiced by Ashley Eckstein.

Anakin Skywalker’s Padawan went on to appear in all seven seasons of the animated Clone Wars series and in Star Wars Rebels.

As ScreenRant outlines, the Togruta character has also appeared in the following canon materials, with which most Star Wars fans will be familiar:

…she was heard in Star Wars: The Rise of Skywalker, among the Jedi voice cameos heard by Rey on Exegol. Outside the movies and shows, Ahsoka starred in her own eponymous novel, 2016’s Ahsoka, which focuses on her time after leaving the Jedi Order. She’s also made appearances in comic books such as Jedi of the Republic and Age of Republic, while her video game appearances are a little looser in terms of canon: she’s featured in several mobile games, including Galactic Defense and Force Arena

The fan-favorite bounty hunter Boba Fett first appeared in a non-canon role as an animated character in the perhaps ill-advised 1978 Star Wars Holiday Special — this was followed by the equally ill-advised Boba Fett cereal box action figure that posed a massive safety hazard to children across America.

Most recently, Fett appeared — briefly, at least so far —  in The Mandalorian, Season 2, Episode 1 (Chapter 9: The Marshal).

Related: ‘Book of Boba Fett’ Has to Be ‘The Mandalorian’ Season 3

As with Ahsoka, ScreenRant provided these details about additional Boba Fett appearances, all of which have featured his signature Mandalorian armor:

Boba Fett, of course, is among the longest-running active Star Wars characters, having first appeared in The Empire Strikes Back (the Holiday Special doesn’t count, thankfully) before his death in Return of the Jedi. As well as his backstory being fleshed-out in the prequels, Boba also appeared in several episodes of Star Wars: The Clone Wars, novels such as Dark Disciple (as well as his return being set up in Aftermath), his own one-shot comic book – Age of Rebellion: Boba Fett 1 – and appearances in several others, and the video games Star Wars: Battlefront and Battlefront II.

What are your thoughts? Are you surprised these are the two Star Wars characters who have appeared in all forms of canon media? Which character do you think will reach this milestone next?