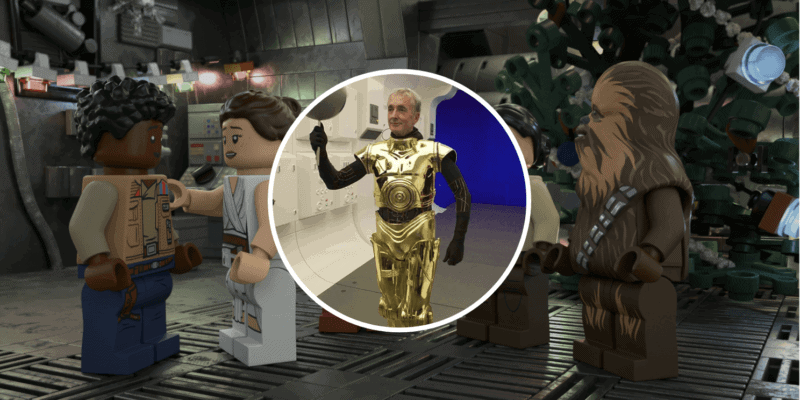 It’s been 42 years since the original Star Wars Holiday Special — which introduced the Star Wars fandom to Boba Fett and Life Day — aired on television.

Inside the Magic recently had the chance to attend a press conference with Anthony Daniels, the actor who has brought beloved protocol droid C-3PO to life for over four decades. Daniels shared details about Star Wars holiday shows new and old — and even shared some insider details about the future!

Almost immediately, Daniels was asked about the original 1970s Star Wars Holiday Special, which has a reputation for being campy and, quite frankly, difficult to get through — even for the most hardcore Star Wars fans.

Daniels — all in good fun — laughed and said:

Every religion has its festival days and Life Day is for the Wookiees. And there we were meant to be celebrating this event and there’s Mark and Carrie and Harrison and me in this very dark, basically black drapes. It was like a funeral. It was dreadful. And then you watched it and you thought, ‘I didn’t realize it was as dreadful as that.’ Well, it was.

So when the producers came to me and said, ‘We’re going to make a holiday special,’ I laughed. But, as you will find out, it’s very, very different and it’s charming and it’s LEGO — that I adore.

Later, when Daniels was asked what one positive thing about the original Holiday Special was, he quipped, “I got paid!,” then quickly acknowledged he was joking and shared that time spent with “Mark, Carrie, and Harrison” — Mark Hamill [Luke Skywalker, Carrie Fisher [Princess Leia Organa], and Harrison Ford [Han Solo] — was always time well spent.

Daniels was asked if C-3PO will continue to be featured in the Star Wars universe in the future — he is the only actor to appear in all nine Skywalker Saga films and is, therefore, arguably more integral to the storyline in some ways than any other character.

I think his story is far from over. I am delighted to say the new Star Wars Holiday Special is the latest iteration, not the last I have to tell you, but my lips, I mean, Threepio’s lips are sealed. He doesn’t have lips, does he have lips? Anyway. There are other things coming up, not major movies but stay tuned.

Threepio is too important a character to disappear and I don’t believe fans will allow him to disappear.

At another point, the Star Wars actor said:

And, 3PO has seen all sorts of things over the years. He’s been on the Donny & Marie Osmond Show and the Muppet Show. And he’s used to crazy experiences that bring out certain qualities in him. And so long may that go on.

Daniels, as you read earlier, is a big fan of the LEGO version of the Star Wars Holiday Special (as is this writer — more on that next!)

He shared this when asked about his thoughts on the Christmasy revival:

And, it’s a great lead in. Anybody with small children who don’t yet know that Star Wars is a very important film concerning the adventures of a gold robot played by Anthony Daniels, if they don’t know, it’s a great introduction. And, I think people are going to have fun over the holiday season talking about it and explaining to kids, well, this is about this and this is about that. And then let’s go watch the movie. So, it’s an all around winner and actually has negated my earlier memories.

So, should you tune in on November 17?

Short answer: Absolutely! I had the opportunity to screen the LEGO Star Wars Holiday Special and viewers are in for a treat.

Without giving any major plot points away, you can expect to see Rey battle Darth Vader (what?!), sequel Han Solo and original trilogy Han Solo team-up (what, again?!), and plenty of Poe Dameron party planning antics.

Don’t miss out and make sure you stream the LEGO Star Wars Holiday Special starting tomorrow, November 17, only on Disney+!