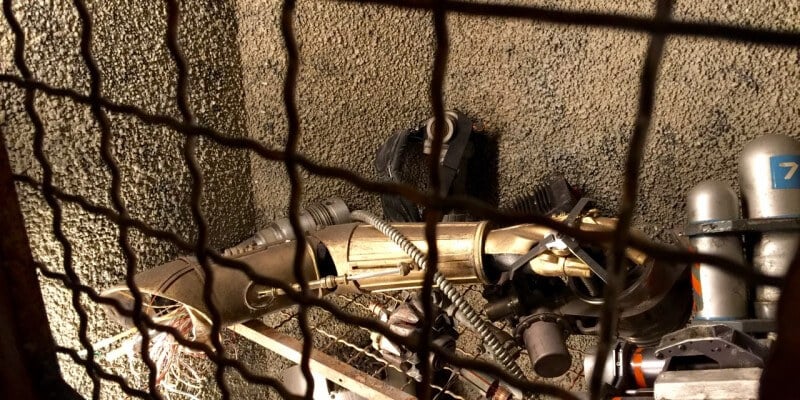 Little to this day remains known about C-3PO’s salvaged red arm and why he’s equipped with it by the time of the events depicted in Star Wars: The Force Awakens.

Though it received a few passing mentions in the movie, just how exactly he lost his original arm remains a mystery for now. In Pablo Hidalgo’s official Visual Dictionary for the film, C-3PO is said to be “uncharacteristically quiet when it comes to discussing his salvaged arm,” while also explaining that “it is a memento of another droid’s sacrifice.”

In any case, during a recent stroll through Star Wars Launch Bay at Disney’s Hollywood Studios I came across a feisty Jawa who proceeded to be fascinated by my car key, so much so that he scampered off to this little corner near the character meet and greets and attempted to unlock the contents inside. As I peered through, I noticed something quite familiar. Look, I can’t say it’s definitely C-3PO’s missing arm, but I don’t know how many other protocol droids in that exact color are roaming around the galaxy that also happen to be missing their left arm.

Thankfully, we’ll know soon enough the fate of his arm once and for all with the release of an upcoming one-shot Marvel comic book coming out on April 13. Originally planned for the initial wave of “Force Awakens” comic books when the movie came out in theaters back in December, it’s been delayed a few times for unknown reasons.

Follow everyone’s favorite protocol droid as he Journeys to Star Wars: The Force Awakens, in this special one-shot leading up to his appearance in the film! Just how did Threepio get a red arm, anyway? Find out here as the blockbuster creative team of James Robinson and Tony Harris of DC’s Starman reunite for the first time in nearly two decades!