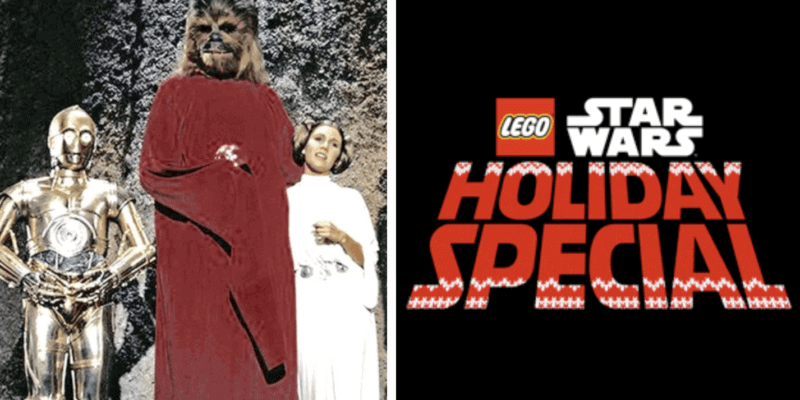 If you love Star Wars, you’re going to want to tune into Disney+ on Tuesday, November 17. Just in time for the holiday season, Disney and Lucasfilm are debuting The LEGO Star Wars Holiday Special on the streaming platform!

According to the official Disney synopsis:

“The LEGO Star Wars Holiday Special” reunites Rey, Finn, Poe, Chewie, Rose and the droids for a joyous feast on Life Day, a holiday first introduced in the 1978 “Star Wars Holiday Special.” The new LEGO special is the first to debut on Disney+ and will continue the rich legacy of collaboration between Lucasfilm and LEGO—playful adventures told in the endearingly irreverent way that only LEGO Star Wars cobranded content can.

Directly following the events of “Star Wars: The Rise of Skywalker,” Rey leaves her friends to prepare for Life Day as she sets off on a new adventure with BB-8 to gain a deeper knowledge of the Force. At a mysterious Jedi Temple, she is hurled into a cross-timeline adventure through beloved moments in Star Wars cinematic history, coming into contact with Luke Skywalker, Darth Vader, Yoda, Obi-Wan and other iconic heroes and villains from all nine Skywalker saga films. But will she make it back in time for the Life Day feast and learn the true meaning of holiday spirit?

Life Day was a time-honored holiday observed by the Wookiees on their forested home planet of Kashyyyk, in the galaxy’s Mid Rim. It celebrated the values and tenets of Wookiee culture, including family, joy, and harmony. Life Day celebrations involved a feast and journey to the Tree of Life, which represented the first seed and spark of life on the planet.

Many passionate Star Wars fans celebrate the Wookiee holiday on November 17 every year.

There is no word on whether or not bounty hunter Boba Fett, who originally appeared as an animated character in the original 1978 Star Wars Holiday Special, will be making an appearance in the streaming LEGO version.

Are you looking forward to the Disney+ LEGO Star Wars Holiday Special coming this November?

Comments Off on ‘The LEGO Star Wars Holiday Special’ to Premiere on Disney+!