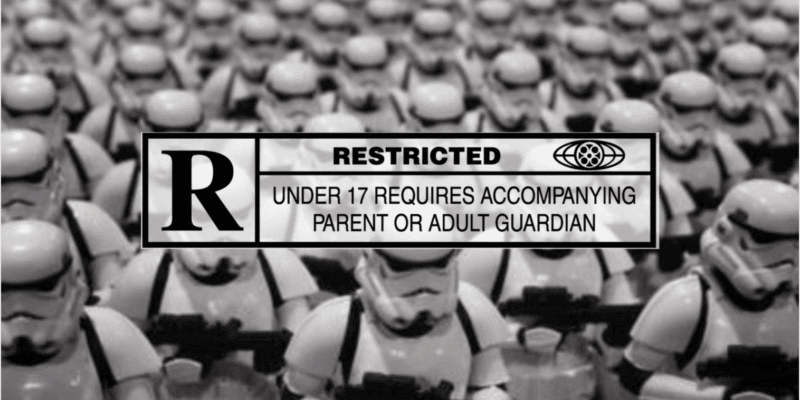 In Hollywood, there has been a long held tradition of major film studios not making big-budget R-rated films. More than moral, the reasons for this are often fiscal. Historically, major motion pictures with an R-rating don’t do well at the box office.

Terminator: Dark Fate (2019) is a prime example. The film cost upwards of $185 million to make, plus marketing costs. Comscore reports, however, that total ticket sales at North American movie theaters were only $29 million.

To date, the Star Wars Skywalker Saga has never had an installment with an R-rating. This could be about to change, however. Online rumors in the Star Wars fandom abound that Lucasfilm is seriously considering a foray into R-rated territory in the near future.

What direction could an R-rated Star Wars take?

Since Lucasfilm and Disney haven’t actually confirmed that there will be an R-rated Star Wars movie, there is, of course, no way to know for sure what direction the storyline would take. Some options, however, include the following.

A return to a familiar planet.

The most recent rumors aren’t the first about a Star Wars movie with an restricted rating. In March of this year, Marvel’s Doctor Strange director Scott Derrickson Tweeted about his idea for the darkest Star Wars film yet.

Derrickson wrote “Just asked what kind of Star Wars movie I would make. I answered that I would make Hoth, an R-rated frozen planet horror film in the vein of The Thing or Lovecraft’s In the Mountains of Madness, with zero connection to any previous characters or storylines.”

Returning to a familiar planet in the Star Wars story, but with a brand new cast of characters, is certainly one direction an R-rated movie could go.

This seems like a particularly good option since both John Boyega (Finn) and Oscar Isaac (Poe Dameron) have indicated they don’t wish to return for additional Star Wars installments.

The notion of an Order 66 movie has been around for awhile and it would be the perfect subject matter if Lucasfilm decided to take a stab at an R-rated Star Wars feature film.

The Order 66 description on the Star Wars Fandom Wiki reads:

Order 66, also known as Clone Protocol 66, was a top secret order identifying all Jedi as traitors to the Galactic Republic and, therefore, subject to summary execution by the Grand Army of the Republic. The order was programmed into the Grand Army clone troopers through the behavioral modification biochips implanted in their brains, making it impossible for the clones to disobey the command to turn against their Jedi Generals.

Chancellor Palpatine famously says “Execute Order 66” in Star Wars: Episode III – Revenge of the Sith and the the backstory of the military order was explored in the animated Star Wars: The Clone Wars.

An Order 66 film would allow Lucasfilm to very literally explore the dark side of the Star Wars story without straying too far from the all-ages storytelling Star Wars has been known for to date.

It is worth noting that there has never been an R-rated movie made under the Disney name, so it remains to be seen if Walt Disney Company executives would be willing to let Lucasfilm go in this direction.

What do you think about the possibility of an R-rated Star Wars movie?

Comments Off on Could Lucasfilm Be Approaching R-Rated Territory With ‘Star Wars’?