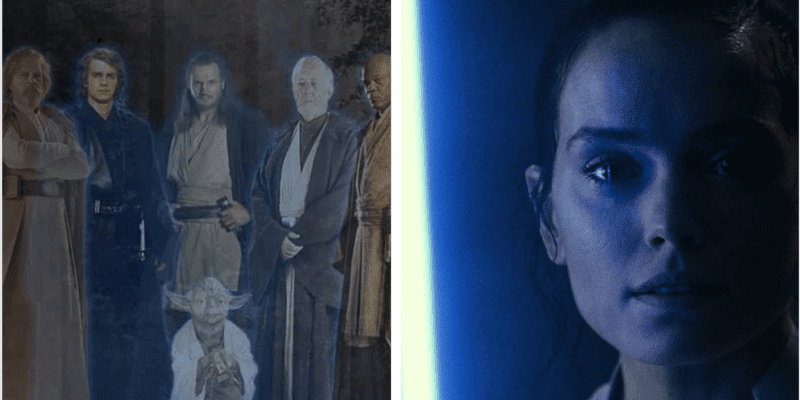 The Star Wars fandom found Star Wars: Episode IX – The Rise of Skywalker to be divisive, with many Star Wars fans feeling like the filmmakers missed the mark during several key scenes.

YouTube user jon h has created a powerful fan edit of the “All the Jedi” scene that includes all of these force ghosts.

Daisy Ridley, who played Rey, has spoken out about the backlash that Rise of Skywalker received, both critically and in the passionate Star Wars fan community, saying:

“It’s changed film by film honestly, like 98% it’s so amazing, this last film it was really tricky. January was not that nice. It was weird, I felt like all of this love that we’d sort of been shown the first time around, I was like ‘Where’s the love gone?’ I watched the documentary, the making-of, this week, and it’s so filled with love; and I think it’s that tricky thing of when you’re part of something that is so filled with love and then people…You know, everyone’s entitled to not like something but it feels like it’s changed slightly. I think in general that’s because social media and what have you.”

The next Star Wars film is scheduled to hit theaters in 2022. In the meantime, however, Star Wars fans can look forward to multiple Disney+ series, including the continuation of The Mandalorian (Season 2 and Season 3) and the upcoming Obi-Wan Kenobi series.

What do you think about this Rise of Skywalker force ghost fan video? We love the inclusion of all of the Jedi knight force ghosts who came before Rey!