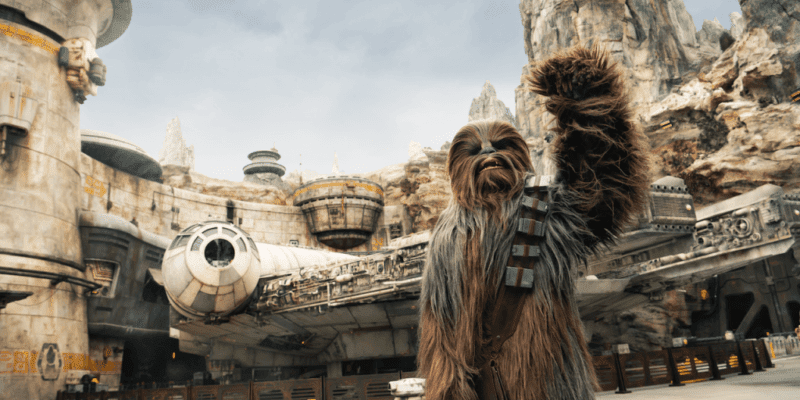 Star Wars super fans and Galaxy’s Edge enthusiasts, it looks like you may have something exciting to look forward to at the Disney Parks. A new book by Lucasfilm and Walt Disney Imagineering suggest that a few new festivals could be coming to the theme parks in the future.

The Traveler’s Guide to Batuu will serve as an “in-world travel guide to the Black Spire Outpost village on the Star Wars planet of Batuu.” And, according to local southern California news source the OC Register, the book contains some valuable information about what may be celebrated at Galaxy’s Edge in the future.

OC Register says that, according to the Traveler’s Guide to Batuu, there are three local Batuuan festivals in the Spring, Fall and Winter, which are “major annual holidays” with unique traditions.

Black Spire Day is celebrated every year on May the Fourth. Unfortunately, this year, both Galaxy’s Edge lands at Disneyland Resort and Walt Disney World Resort were closed on May 4, 2020, so we didn’t have the chance to see what all the fun was about on Black Spire Day on Batuu. But here’s a bit more about it:

“On this happy holiday locals decorate the outpost with pieces like colorful tarps, ribbons and flowers. Locals sing traditional songs, feast and tie wishes to the Trilon tree. Sometimes the evening ends in a procession through the outpost with a fireworks display.”

Every fall, the Batuuan Harvest Festival is said to take place, as stated in the Traveler’s Guide. The book says that it honors the “gold dust,” the Batuu planet’s most valuable resource.

“Only during this festival does crime boss Oga Garra consider allowing her valuable commodity of golden lichen to be used in special drinks and dishes. The outpost itself is decorated in golden hued banners streamers and locals have been known to enhance their garb with similar colors.”

The third festival described in the book is called Life Day:

“On Batuu, locals celebrate the ideals of peace, harmony and freedom for all beings no matter how different they may appear. Festive decor can be seen throughout Batuu and at the close of Life Day everyone gathers around the black spire to sing songs and spread good cheer to one another.”

Note that right now, we don’t yet know what it will be like to experience these events at Black Spire Outpost in Galaxy’s Edge. Since the lands opened in 2019, these festivals haven’t been celebrated. However, as the Traveler’s Guide to Batuu is a new book being published, we wouldn’t be surprised if Disney made the decision to celebrate these three festivals in the theme parks annually. It would serve to further establish the theme of the land and the culture of the people who live there.

We’ll definitely keep our eyes peeled for any upcoming events coming to Star Wars: Galaxy’s Edge at the Disney Parks! Disney hasn’t yet made any announcements for what we can expect when it comes to possible Galaxy’s Edge festivals at Disneyland and Hollywood Studios, but this new book sure does spark our curiosity.

Disney Parks Blog says that the book — which was created in collaboration with Walt Disney Imagineering and Lucasfilm, just like Galaxy’s Edge — features “never before seen artwork – as well as exclusive interviews about the land’s creation – from artists at Walt Disney Imagineering, Lucasfilm and many others, this book offers an inside look at what goes into making an immersive Star Wars destination.”

Click here to book a trip to Galaxy’s Edge for yourself! Visit Disneyland in California or Disney World in Florida — and be among the first to stay in the Star Wars: Galactic Starcruiser when it opens!