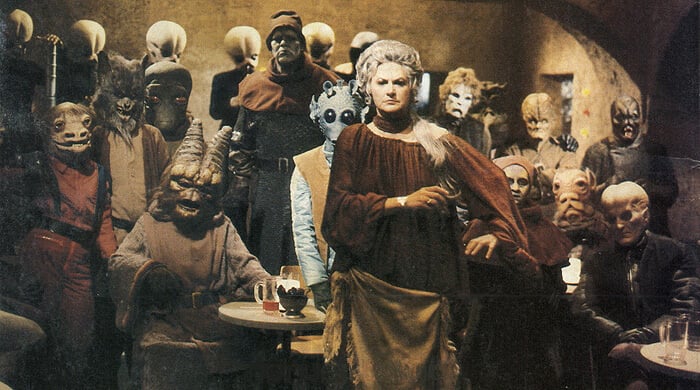 41 years ago today (November 17, 1978) there was another disturbance in the Force. Fans across the galaxy endured the one and only broadcast of “The Star Wars Holiday Special.”

Would-be Jedi Knights were reacquainted with Luke, Han, Lea, Chewbacca, Darth Vader, C-3PO and R2-D2. The 98 minute special introduced the world to Chewbacca’s homeworld (Kashyyyk) and his family:  Attichitcuk (“Itchy” – his father), Mallatobuck (“Malla” – his wife), and Lumpawarrump (“Lumpy” – his son); as well as a much anticipated, animated arrival of Boba Fett.

“It is Life Day, a holiday that is celebrated on Chewbacca’s home planet Kashyyyk. Chewie and Han Solo are trying to get to the planet where Chewie’s family is waiting for him, but the Empire is out searching for the Rebels, giving everyone a hard time. While we are waiting we get a look at the everyday life of a Wookiee family. We meet all the familiar characters from “Star Wars: Episode IV – A New Hope” (1977) and we are introduced to Boba Fett during a short cartoon. We also pay a visit to the Cantina and meet all the monsters again.” –  IMDB plot description of “The Star Wars Holiday Special” Aside from insisting that the story revolves around the “Life Day” celebration of a family of Wookiees, George Lucas had little to do with actual filming of CBS’s requested television special. It was a mistake he’s forever regretted. Taking up a two-hour prime time perch, “The Star Wars Holiday Special” was revealed to the world from 8 pm to 10 pm on Friday, November 17th, 1978. With the added “entertainment,” (Jefferson Starship, Bea Arthur, Art Carney, Harvey Korman and Diahann Carroll) the special felt more like a typical 1970’s variety show with bits of “Star Wars” thrown in for good measure. For most, the only redeeming moments of the two-hour disappointment was the cartoon introduction of Boba Fett. Of note, it is also the only part of the 1978 special to be officially released on DVD (as an extra). Several stars from the feature film made appearances as did many recycled movie clips. The special was intended to bring more fans info the fold and sell more toys. Instead, it has become the single most disappointing part of the Star Wars franchise, finishing second in the Nielson ratings that night – behind an episode of “Love Boat.” Kenner’s action figure prototypes of Chewbacca’s family never made into production. Comments Off on Happy Life Day! A brief history of “The Star Wars Holiday Special”