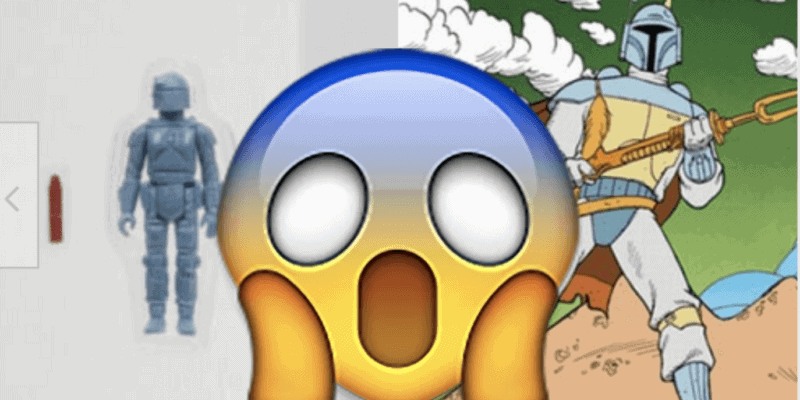 The Holy Grail of vintage Star Wars merchandise is the prototype Boba Fett Rocket-Firing L-Slot AFA 90. Originally offered by toy brand Kenner as a mail-order special, the Boba Fett rocking firing figurine was deemed a choking hazard before it shipped and the design was altered.

A few unpainted prototype models managed to remain in circulation, however, and they are known to sell for incredible prices. Several rocket-firing Boba Fett figures have fetched over $100,000 at auction in the past. Now, the highest asking price ever, $225,000.00, has been posted on eBay.

The listing states that the retro Kenner Boba Fett is brand new in the package and includes 12 images of the retro Star Wars merchandise. The seller requests that legitimately interested buyers send a message for additional images.

There is also a “Best Offer” option if a quarter of a million dollars is just a little too steep for your checking account. The unfinished prototype Boba Fett figurine includes a notarized letter of authenticity.

There are also several close-up images of the rare Boba Fett figure in a protective case. Here, you can see the tiny rocket that caused the toy to be banned before it could ship in the 1970s.

If you have a legitimate interest in purchasing this Star Wars toy, visit eBay.

Boba Fett is Returning to the Star Wars Universe

The Boba Fett character has always had something of a cult fan base in the Star Wars community. Now, Jon Favreau and his team behind The Mandalorian have heard their fans and will be bringing the bounty hunter back in Season 2 of the Disney+ series.

Fett (Temeura Morrison) will presumably encounter Din Djarin (Pedro Pascal) and Baby Yoda at some point on their journey to find The Child’s home world. Few details are known about how Boba Fett will play into The Mandalorian’s second season storyline, but we only have to wait until October to find out what happens next.

Are you taken aback by the asking price of this vintage Boba Fett figurine? Do you think this particular rocket-firing Boba Fett will become the most expensive Star Wars merchandise ever sold?

Comments Off on If You Can Spare $225,000, You Can Own This Boba Fett Merchandise