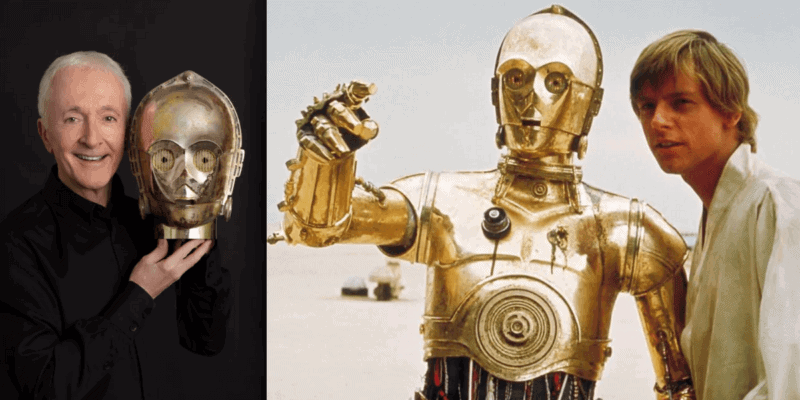 “Did you hear that?”

British actor Anthony Daniels is the man responsible for bringing the galaxy’s favorite protocol droid C-3PO to life, and the only actor to appear in all nine films of the Star Wars Skywalker Saga. But he has since admitted he almost declined to even audition for the role.

In an interview with CNET, Daniels tell the story:

“At the age of 24, I was so fed up with life — not being an actor — that I took myself to drama school for three years. [In the book] I talk about doing mime with a blank mask on [gestures to his face]. And so I left drama school and I was very lucky. I won an award to do the BBC radio drama repertory company for six months. After that, I joined a theatre company in London. And I’d been doing stuff on TV and having great fun in the theater.

“Then there’s an invitation. I thought it was from Hollywood, because in my imagination, all films came from Hollywood. And all people in films are kind of cigar-smoking, big guys. I assumed that this unknown American wanted to see me because I was physically quite neat and could control my body as a mime person might, something I’d learned at drama school. George Lucas, was seeing a lot of actors in England because the original film, to many people’s surprise, was filmed about half an hour north of where I’m sitting in a place called Elstree Studios.

“I’d spent three years of drama school and I thought I was really quite a serious actor (Laughs). I was a bit snobby about it. Anyway, my agent said, “Go and see him. You never know what it could lead to.”

Daniels explained that he was not the only actor being considered for the role. George Lucas considered 30 different actors to play C-3PO, including Richard Dreyfus, but George was convinced by V/O professional that Daniels was the right fit.

George’s dissonance from the cigar-chewing Hollywood cliche helped Daniels warm up to the project. Still, Daniels admitted, “I wasn’t really that interested, but I was polite.” He fell in love with what would become a role for a lifetime when he saw concept art of C-3PO by Ralph McQuarrie.

“I fell in love with the face,” he said. “fell in love is an easy, but not quite the right word. I was entranced by the face. He had a forlorn quality. It was as though he was lost. He wanted to come and take my hand. There was something there that clicked.”

And with the opening lines and scenes of what has become known today as Episode IV: A New Hope, C-3PO did just that. He took the hands of millions of fans and lead us into an unforgettable adventure in a Galaxy Far, Far Away.

It is difficult to imagine what the entire Star Wars franchise would be like without Daniels as C-3PO.

You can watch the full interview with Star Wars actor Anthony Daniels here:

Are you shocked to learn Anthony Daniels almost didn’t do Star Wars? Where does C-3PO rank among your favorite Star Wars characters? Let us know in the comments!