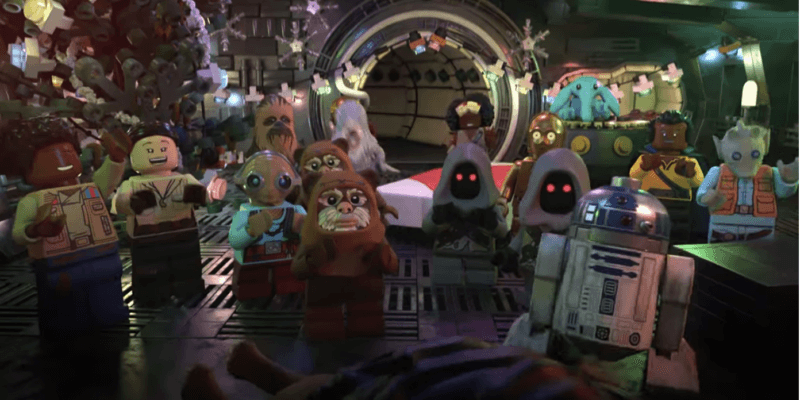 ITM previously reported that a new LEGO version of the famed Star Wars Holiday Special — the original 1978 show brought us bounty hunter, Boba Fett, in animated form — will be premiering on Disney+ this November.

Now, new details about the upcoming Star Wars streaming event have been shared by Disney.

According to the official press release about the 2020 LEGO Star Wars Holiday Special:

Disney+ is bringing together some of the brightest stars in the Star Wars galaxy for the ultimate holiday family reunion, the “LEGO Star Wars Holiday Special.” Today the streaming service also gave fans a first look at key art for the special, set to premiere on Tuesday, November 17, also known as the fan-favorite holiday Life Day first introduced in the 1978 “Star Wars Holiday Special.”

“The LEGO Star WarsHoliday Special” reunites Rey, Finn, Poe, Chewie, Rose and the droids for a joyous feast on Life Day. Rey sets off on a new adventure with BB-8 to gain a deeper knowledge of the Force. At a mysterious Jedi Temple, she is hurled into a cross-timeline adventure through beloved moments in Star Wars cinematic history, coming into contact with Luke Skywalker, Darth Vader, Yoda, Obi-Wan and other iconic heroes and villains from all nine Skywalker saga films. But will she make it back in time for the Life Day feast and learn the true meaning of holiday spirit?

We love that Disney and Lucasfilm were able to reunite some of Star Wars’ most iconic actors to participate in this Holiday Special reboot!

Related: Laugh It Up, Fuzzball – Make a Delicious Wookiee Fuzzball Cocktail at Home!

The Star Wars Wookieepedia provides additional details about Life Day, for those who are unfamiliar with the Wookiee holiday:

Life Day was a holiday that celebrated values and tenets of Wookiee culture, which included family, joy, and harmony. Traditionally held at the Tree of Life on the forestedplanetKashyyyk, celebrations involved festive décor, feasts, and music, where people were reminded of compassion—the promise of the Tree of Life.

Now, as of November 5, new details — including the first trailer — have been released for the upcoming Holiday Special. You can view the trailer in full below:

Will you be tuning in to Disney+ to watch the LEGO Star Wars Holiday Special next month?