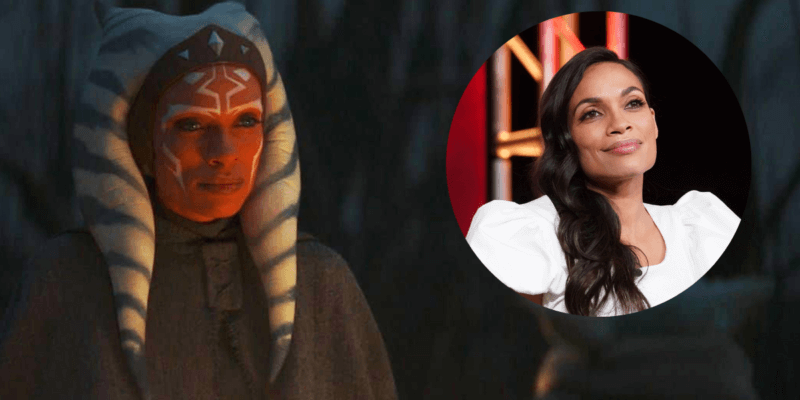 When we saw Rosario Dawson as Ahsoka Tano in The Mandalorian, we were thrilled, to say the least. Though the actress did not originate the role (that credit goes to Ashley Eckstein), she portrays Ahsoka in a way that is leaving fans excited about this live-action character — and intrigued to see where she will go next.

In a new interview with Vanity Fair, Dawson and Dave Filoni share how the actress was cast as Ahsoka in the first place and what the role means. Additionally, Dawson touches on a controversy that led Star Wars fans to call for a recast — and she explains that, especially recently, she hopes the record is clear.

Many fans were surprised — and even disappointed — to see that the original voice actress for Ahsoka, Ashley Eckstein, would not be portraying the character in live-action in The Mandalorian. But Eckstein and Dawson have publicly shared their support for one another. And after seeing Ahsoka make her live-action debut this season, it’s clear that fans are eager to see what comes next for her.

But how did Dawson get cast as Tano in the first place? She explained to Vanity Fair that, at first, she was “fancast” — as in, fans took to social media to call on the Star Wars team to cast her as a live-action Ahsoka. And, although fans assume that by the time Dawson responded and said she’d love to play the role, it was already in the works. But that’s not actually the case.

Showrunner Dave Filoni explained, “I was still trying to figure out how to get off Tatooine myself at that point. But when I started working with Jon [Favreau], I’d bring up the character and he’s like, ‘Well, who are you thinking of playing her?’ I said, ‘Well, Rosario Dawson’s top of my list,’ and he’s like, ‘I know her!’ So immediately that starts to fit really well.”

So, around the time when Season 1 was about to drop, Favreau and Filoni called Dawson to discuss bringing her on for Season 2, and she excitedly agreed. She had some awareness of who Ahsoka Tano is, but she quickly began doing her research, watching Clone Wars and becoming fascinated with Ahsoka’s story and her connection to Anakin Skywalker. After all, Ahsoka was the Padawan learner to Anakin and a hero of the Clone Wars — and, to say the least, she’s pretty spectacular.

When it comes to figuring out who should play Ahsoka in The Mandalorian, Filoni said he “just knew”:

“When I was first exploring the possibility of directing live-action, I asked [Lucasfilm president] Kathleen Kennedy about casting and when you knew someone was right for a part. She thought about it and said ‘you just know.’ And she was right. When I met Rosario, I just knew she was right for Ahsoka. Yes there was the tweet, and her interest in the part, yes she has been in action movies and is a huge fan of sci-fi and fantasy stories, yes, she knew Hayden Christensen and pictures of them together look like Anakin and Ahsoka. But in the end, when I met her and we talked, I just knew.”

Did you know? Rosario Dawson, who is rumored to play Ahsoka in #TheMandalorian, and Hayden Christensen previously appeared together in Shattered Glass pic.twitter.com/XjpXDxFMNF

Related: Could Ahsoka Tano and Bo-Katan Get Their Own Disney+ Series?

Controversy: Fans Called for a Recast

Many of those who have been following Dawson’s journey as Ahsoka up until this point will remember that, at one point, allegations made against the actress led to a call for a recast.

Back in 2019, a lawsuit filed by a family friend of Dawson’s accused the actress and her family of being transphobic. The allegations led to the hashtag #RecastAhsoka trending on Twitter, and many were left wondering if the Lucasfilm and Disney team would listen. Though the lawsuit accused Dawson and her family of anti-trans bias, the actress called it false and baseless, and 18 of the 20 claims have since been voluntarily withdrawn.

In the Vanity Fair interview, Dawson shared her response and a message to fans:

Well, firstly, I just want to say I understand that, and why people were concerned, and are concerned. I would be, too, if I heard some of those claims. But I mean, as we’re seeing right now in these past months, and just recently actually, the truth is coming out. Every single claim of discrimination has been dismissed by the person who made them, and as you’ve said, the fact that this is coming from someone I’ve known since I was a teenager, the better part of my life, and who my family was trying to help as we have many times in the past, it really just makes me sad. But I still have a great empathy for him.

The reason that all of the discrimination claims were dropped is because they didn’t happen. I was raised in a very inclusive and loving way, and that’s how I’ve lived my entire life. I’ve always used my voice to fight for, lift up and empower the LGBTQA community, and use my platform to channel trans voices, in fiction and nonfiction work that I’ve produced and directed. So I feel the record is really clear.

What do you think of Rosario Dawson as the live-action Ahsoka Tano in The Mandalorian? Let us know in the comments!

Comments Off on Dawson & Filoni Talk Ahsoka Casting and Controversy