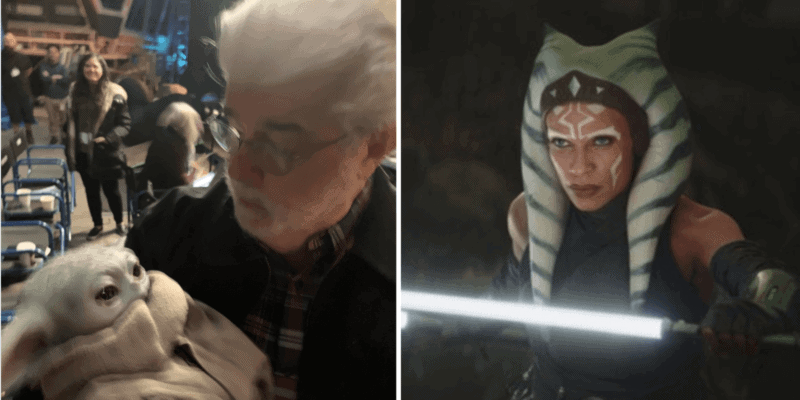 Although George Lucas sold Lucasfilm — and the entire Star Wars catalog — to Disney in 2012, that certainly doesn’t mean he’s completely walked away from the galaxy he created.

As a matter of fact, in January, The Mandalorian showrunner Jon Favreau shared this picture of George Lucas holding the Baby Yoda puppet — now known as Grogu — on set during Season 2 filming.

…but there is something about that slightly blurry snapshot that they don’t know. Just out of frame stood another beloved galactic figure who until then had only existed in animation—Rosario Dawson as Ahsoka Tano.

Her casting was long rumored online, but no one else got to see her as the Force-wielder with the blue and white headtails and twin lightsabers until last Friday’s new episode of the Disney+ series. That chapter—“The Jedi”—not only unveiled the live-action, grown-up version of the The Clone Wars and Rebels hero…

Related: Why Was Ahsoka Tano’s Appearance Different in ‘The Mandalorian’

If you look closely at Favreau’s Twitter post, it even appears that Dawson’s headtails might be visible just behind his shoulder! Due to the blurry nature of the image, though, nobody even thought about this until now.

In the article, Dawson shared details about her encounter with the iconic George Lucas while she was filming The Mandalorian:

I actually got to be there on the day that there’s that photo [the photo of Lucas with The Child puppet]. Someone took a picture of George Lucas holding Baby Yoda. I’m still calling him Baby Yoda—Grogu! I was there that day. I was all dressed up, I was just off to the side of that photo, all done up as Ahsoka. And I remember it broke the internet when that picture came out. It was just an amazing, amazing moment, and we were all beside ourselves. It was definitely very geek-out.

I was definitely nerve-wracked, and it was great to be there with him and Dave [Dave Filoni, who directed Season 2, Episode 5 – Chapter 13: The Jedi]. I mean, it’s a lot of pressure. But it was also really fun. Both of them were looking at me but they weren’t, you know what I mean? They were looking at their imaginations come to life.

It’s fascinating to hear Dawson talk about Lucas and Filoni’s creative process as they filmed her episode of The Mandalorian. The famous Star Wars duo developed the animated Ahsoka Tano — who appeared in both Star Wars: The Clone Wars and Star Wars Rebels — together, so it was undoubtedly incredible for both of them to see Anakin Skywalker’s Padawan come to life quite literally before their eyes.

We don’t yet know for sure if Dawson will make any additional appearances in Season 2 of The Mandalorian, although we’ve been promised that the final three episodes will be a ‘rollercoaster’ for fans.

However, there are numerous rumors that the actress’s time as Ahsoka isn’t over with Chapter 13: The Jedi.

What do you think about Rosario Dawson’s experience working with Grogu and George Lucas?

Comments Off on Rosario Dawson Discusses Working With George Lucas, Grogu On Set