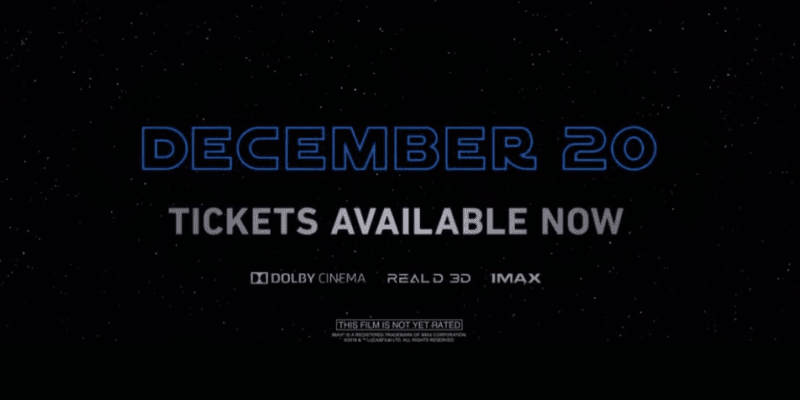 2020 has been a YEAR. Between the ongoing pandemic and all the craziness it’s caused, the U.S. election, and…well, basically everything, nothing can surprise us anymore.

Related: Daisy Ridley Speaks Out: Was She Satisfied With Rey’s ‘Star Wars’; Ending?

Today, even YouTube became confused by the wackiness this year has brought. The website began replaying an old Star Wars: Episode IX – Rise of Skywalker ad, encouraging viewers to purchase tickets to see the film in theaters.

The problem? Rise of Skywalker hit theaters on December 20, 2019.

We can confirm we saw the ad on YouTube ourselves, and we are just as confused as everyone.

Does this mean I have to do 2020 all over again? pic.twitter.com/R3CcL1Dzox

Gustin’s followers were quick with witty retorts to the technological error, with Matthew Bayer writing:

Even Snopes has already fact-checked the situation and confirmed that, yes, Rise of Skywalker ads have mistakenly been playing on YouTube.

Snopes shared these helpful details about the movie ad mix-up:

On Nov. 23, 2020, Twitter users reported seeing advertising on YouTube videos for “Star Wars: The Rise of Skywalker.” A voice-over in the 15-second video ads began with “this Christmas” and ended by saying “tickets available now,” with Dec. 20 displayed as the release date. The ninth chapter in the Star Wars saga was originally released one year earlier, on Dec. 20, 2019, and is often referred to by fans as “TROS.”

However, “Star Wars: The Rise of Skywalker” is not rising again in movie theaters on Dec. 20, 2020. The resurgence of the “Star Wars: Episode IX” YouTube ads appeared to be a mistake. While the reason for the 2019 ads reappearing in 2020 is unknown, it’s possible that in 2019 some YouTube ads for the film were scheduled to run with the wrong year. In November 2019, “Star Wars: The Rise of Skywalker” was being advertised to sell tickets for the film’s release.

You can watch the full Star Wars: Rise of Skywalker ad that is currently airing — and erring — on YouTube below:

Have you seen the accidental ad yet?