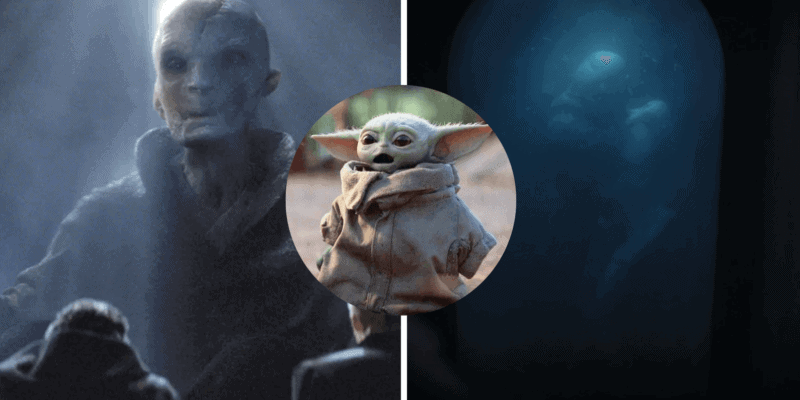 The Star Wars sequel trilogy received mixed reactions from, well, just about everyone. Fans and critics alike were confused by several plot points, but few have caused as much befuddlement as the sheer existence of Supreme Leader Snoke.

Snoke, who serves as Supreme Leader until he is killed by Kylo Ren, is an engineered humanoid life-form who was created by Sith loyalists to carry out Emperor Palpatine’s direct orders. His backstory, however, is not fully explained in any of the three sequel films — Star Wars: Episode VII – The Force Awakens (2015), Star Wars: Episode VIII – The Last Jedi (2017),  and Star Wars: Episode IX – The Rise of Skywalker (2019).

As Twitter user Star Wars Facts & Leaks pointed out, “Snoke’s theme song can be heard during the tank scene in #TheMandalorian Chapter 12”

As Star Wars fans know, Mandalorian showrunner Jon Favreau doesn’t include details like this without a reason — he loves leaving ‘Easter eggs’ for fans, like the earlier Season 2 reference to the Sarlacc pit bounty hunter Boba Fett tried to throw Han Solo into in Star Wars: Episode V – The Empire Strikes Back (1980).

The video message The Mandalorian’s core trio — sans Baby Yoda, in this situation — view from Doctor Pershing (Omid Abtahi) insinuates that The Child’s midi-chlorian count could be the key that unlocks the answers to a lot of questions about Snoke — and the other deformed humanoids in Moff Gideon’s lab.

ComicBook.com shares this about the possibility that The Mandalorian is about to give us a better Snoke origin story than the sequel trilogy ever did:

The Moff [Moff Gideon played by Giancarlo Esposito] is trying to extract Midi-chlorian’s from The Child, in an apparent attempt to transfer its Force-sensitive powers to the clones. The purpose of this? We don’t have confirmation yet, but there are several key clues that this storyline could be filling in gaps in the storyline of the Star Wars Sequel Trilogy – namely, the origins of Supreme Leader Snoke.

Related: When Will Ahsoka Tano Appear in ‘The Mandalorian’

What do you think? Is The Mandalorian about to fill in the plot holes fans were left with following the conclusion of the Skywalker Saga?