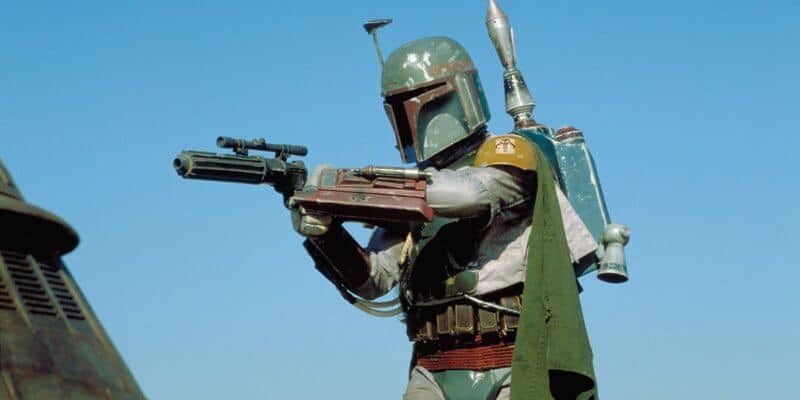 Jeremy Bulloch, the man who introduced Star Wars fans and the world to the legendary bounty hunter Boba Fett has passed away today at the age of 75.

News of his death was shared by actor Daniel Logan, who played younger Boba Fett in the Star Wars prequel Episode II: Attack of the Clones (2002).

Logan posted this photo to Instagram along with the caption:

“IT BRINGS ME TO TEARS TO ANNOUNCE JEREMY BULLOCH HAS PAST AWAY.!! RIP LEGEND ILL NEVER FORGET ALL YOU’VE TAUGHT ME.!! I’LL LOVE YOU FOREVER.!! CONVENTIONS WONT BE THE SAME WITHOUT YOU MAY THE FORCE BE WITH YOU ALWAYS”

Bulloch first appeared as Boba Fett in Episode V: Empire Strikes Back (1980) —after the character was introduced in the Star Wars Holiday Special–when he hunted down and captured Han Solo with the help of Darth Vader to deliver him to Jabba the Hutt.

In 2016, Bulloch shared details about playing the iconic role with Thrillist:

“I didn’t get too much [direction], just that he’s a soldier or a bounty hunter. You see the different costumes, they’re all standing there. You’ve got [director] Irvin Kershner who is a great director, just huge fun. He sort of made it bearable in the heat, and he said, ‘We’re finished with you shortly, so we’ll get you out of that costume. Don’t worry.’ I said, ‘No, I’m fine,’ because I didn’t want to be seen being a ninny going, ‘Oh, it’s awfully hot, can we have a break?’ You don’t do that. You just carry on filming until you’re released.”

Bulloch reprised the role of Episode VI: Return of the Jedi (1983), and was a firm believer that his character survived the Sarlacc pit from the very beginning:

“Boba will be alright. He’ll get out of this,” the actor shared. “If there’s a problem, he can get out. He doesn’t need help. He can do it himself.”

Bulloch also did far more acting outside of Star Wars, accumulating over 100 credits including James Bond films like Octopussy. He returned to Star Wars for a small part as Captain Colton in Episode III: Revenge of the Sith (2005).

The role of Boba Fett is now being played by Temuera Morrison in the Disney+ hit series Star Wars: The Mandalorian.

We here at Inside the Magic are sending our thoughts and prayers to Bulloch’s family. May the force be with you.

Comments Off on Original Boba Fett, Jeremy Bulloch, Has Passed Away