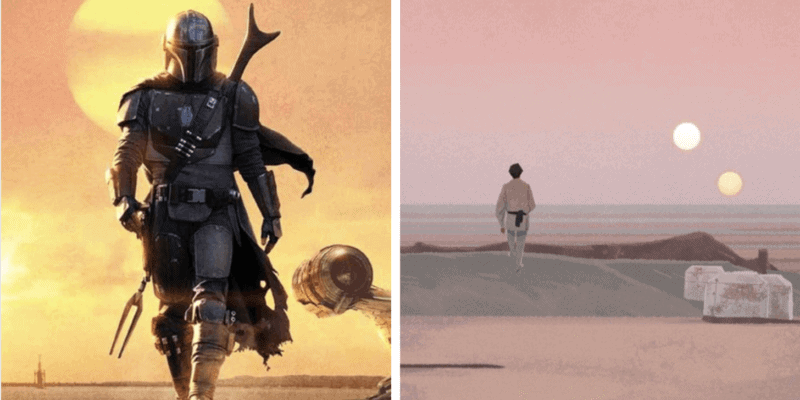 Tatooine was the very first planet the Star Wars audience ever saw — it appears in the iconic opening scene of Star Wars: Episode IV – A New Hope (1977) — and it remains one of the most important locations in a galaxy far, far away.

Despite Luke Skywalker’s assertion that “If there’s a bright center to the universe, you’re on the planet that it’s farthest from,” fans love Tatooine and, as Screenrant noted, it remained a key spot throughout the nine-movie Skywalker Saga:

The galaxy’s dustbowl turned out to be the main base of operations of Jabba the Hutt in Return of the Jedi, and it was subsequently vital to the prequel trilogy as well, appearing in both Star Wars: Episode I – The Phantom Menace and Star Wars: Episode II – Attack of the Clones. Even the Star Wars sequel trilogy headed to Tatooine in the end, with Star Wars: The Rise of Skywalker’s final scene seeing Rey on the old Lars homestead [Luke Skywalker’s home].

Now, the dusty planet — George Lucas originally filmed scenes set there in a Tunisian desert — is beginning to factor into Star Wars television series as well. It was used in the storyline of animated series Star Wars Rebels and has now made appearances in both seasons of the hit Disney+ streaming series, The Mandalorian.

In fact, The Mandalorian — which kicked-off Season 2 on Tatooine on October 30 — has managed to breathe new life into a desert planet that desperately needs it. Here’s how.

It has shifted Tatooine’s culture from debauched to rugged.

Through the years, however, this has changed.

Re-edited versions of Star Wars: Episode IV — A New Hope have suggested otherwise over the years, despite the original movie showing that Han (Harrison Ford) gunned down Greedo before the bounty hunter could aim his laser at Han. George Lucas infamously changed the brief encounter with the 1997 special edition of the first Star Wars trilogy, giving Greedo a chance to fire a bad shot at Han before Han kills him dead.

All this to say, Tatooine was originally portrayed as a desert backwater — a place where only the most corrupt and debauched creatures hung out — either at Mos Eisley’s infamous cantina or Jabba the Hutt’s even more infamous palace.

Mos Eisley has fallen into disrepair, with the once-profitable cantina now deserted and the spaceport run by a woman named Peli Motto [Amy Sedaris] who struggles to make ends meet. Everywhere there are hints of the past…

Now, rather than the debauchery of old, Tatooine operates as a rugged, yet honest, spaceport with one of Jon Favreau’s most eccentric new characters at the helm.

This is a refreshing change to the planet’s reputation and lets Star Wars fans of all ages see it in a new light.

It has introduced fantastic characters to the Star Wars universe.

The aforementioned Peli Motto and her adorable — but not as adorable as Baby Yoda — collection of rundown droids have already made their second Mandalorian appearance in Chapter 9 (Episode 1 of Season 2).

Motto is lovable in a rough-and-tumble way and she humanizes Tatooine in a way that had never been done before. Luke’s aunt and uncle, Beru and Owen Lars, certainly didn’t have the same instant charm and vitality in the original trilogy.

Instead, they seem exactly as you would expect residents of the desert planet to seem — resigned to the fact that they must live out their days leading a numbingly dull existence. Motto flips the script and has personality in spades, in spite of her hardships.

Although showrunner Favreau, Dave Filoni, and Co. have had more time to develop Peli Motto’s character, they also introduced yet another fantastic Tatooine resident in the first episode of Season 2 on the Disney+ platform.

Cobb Vanth (Timothy Olyphant) is everything Din Djarin (Pedro Pascal) isn’t. Like the original Star Wars movies needed Han Solo’s swagger and devil-may-care attitude, The Mandalorian needs Vanth’s. The Marshal of Mos Pelgo, Vanth is a bigger-than-life character who deserves a recurring role — and maybe even a spinoff miniseries of his own.

The Tusken Raiders have been humanized.

As Screenrant points out:

Mos Pelgo had literally been resettled, with a Marshal in Mandalorian armor [Cobb Vanth] repelling slavers and Tuskens alike, and nobody else on the planet even knew about it. The Tuskens themselves have been treated as actual living beings rather than faceless aliens, and The Mandalorian season 2 premiere subtly shone a light on the bigotry and prejudice against them.

This is an important shift in the Star Wars universe. Previously, the Sand People were treated as primitive beings with little to no regard for human life and societal norms.

Now, thanks in large part to Din Djarin and The Child’s translation assistance, they have actually played an integral role in The Mandlorian’s storyline — the people of Mos Pelgo could not have successfully slain the Krayt Dragon in the Sarlacc Pit without the Tuskens’ assistance.

What do you think of the portrayal of Tatooine in The Mandalorian? Do you hope to see more of this new look at the planet in future episodes and Disney+ series?

Comments Off on ‘The Mandalorian’ Has Breathed New Life Into Tatooine