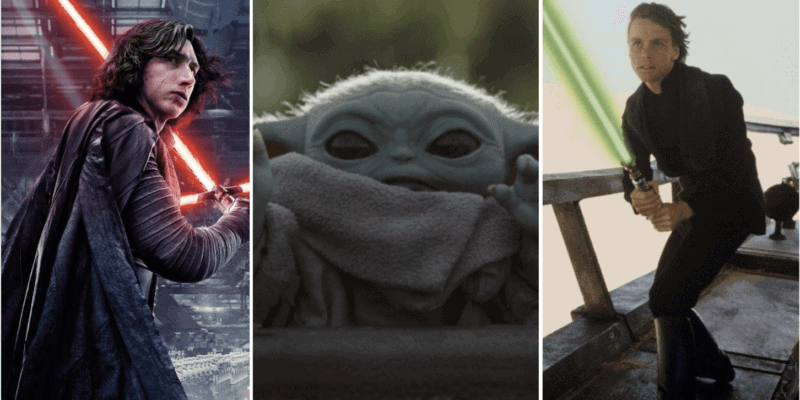 **SPOILERS for The Mandalorian Season 2 Finale ahead**

The timeline — approximately five years after the Empire is defeated in Return of the Jedi — dictates that the franchise’s original trio, Han Solo (Harrison Ford), Leia Organa (Carrie Fisher), and Luke Skywalker (Mark Hamill), are all alive and well in the galaxy at this time.

The first full season — and nearly the second full season — of The Mandalorian didn’t feature any major connections to the original trilogy, particularly for casual fans. In this week’s Mandalorian Season 2 finale, however, the biggest cameo any Star Wars fan could have hoped for finally happened.

Luke Skywalker showed up to rescue Grogu from the clutches of Moff Gideon (Giancarlo Esposito) — and he was played by Mark Hamill.

The CGI technology that was utilized to insert Hamill into the episode was incredibly impressive. But, now that he’s back — and has taken Grogu to continue his Jedi training that ended at the Jedi Temple on Coruscant when Order 66 was executed — what could this mean for Star Wars as the story continues via at least 10 Disney+ series and new feature-length films?

There’s a good chance that we’ll soon see how important the connection between Skywalker, Grogu, and Kylo Ren (Adam Driver) is in regard to what happens next in the Star Wars universe.

At this point in the Star Wars timeline, Luke is probably still tracking down the remnants of the Empire and chasing after Ochi. But it won’t be long before Master Skywalker decides to open his own Jedi academy.

If you’ve seen The Last Jedi, you probably already guessed where we’re headed. What happened to Luke’s Jedi students? Kylo Ren killed them all after he turned to the Dark side. So that means if Grogu winds up training with Luke, it’s totally possible he’ll be murdered by Ben Solo a few years before The Force Awakens.

This might be extremely upsetting, but it’s also weirdly poetic when you consider the greater Star Wars narrative [it also satisfies the hunger that many fans have to learn more about Kylo Ren’s backstory].

The “poetic” aspect here is subjective, of course, but refers to the fact that Darth Vader — who is, of course, Kylo Ren’s grandfather on Leia’s side — obviously failed to kill Grogu during the Order 66 chaos, so now, Ren would be finishing what his grandfather began years prior.

It seems highly unlikely that a being as strong with the Force as Grogu would never have appeared to Rey (Daisy Ridley) in the entirety of the most recent trilogy if he were alive, particularly since his Jedi Master — Luke Skywalker — played a key role in the Star Wars sequels, ultimately engaging with Kylo Ren’s famous red-bladed lightsaber.

Timeline wise, The Mandalorian is set approximately 25 years prior to The Force Awakens, meaning that Grogu would be about 75-years-old during Supreme Leader Snoke and Kylo Ren’s particular brand of terror within the galaxy.

To put it in perspective, Master Yoda was training Jedi younglings by age 100, so Grogu should certainly have had enough control of his Force powers to be of assistance by the sequels if he were, in fact, around to do so.

Moving forward, with so many new Star Wars streaming series and films in different parts of the timeline, we are sure to eventually discover what happened to Grogu — and we may, sadly, need to prepare ourselves for the worst.

The saga that started with Din Djarin (Pedro Pascal) and Grogu’s adventures is set to continue at Christmas 2021 with three series — The Mandalorian (likely featuring bounty hunter Boba Fett played by Temuera Morrison and Fennec Shand played by Ming-Na Wen), Ahsoka, and Rangers of the New Republic — all culminating in a final Disney+ streaming event.

Details about Rangers of the New Republic have not yet been released, but it is possible that it will feature Cara Dune (Gina Carano) and continue the clone storyline from Season 2 of The Mandalorian.

It seems quite likely that, at some point, — particularly with this new Knights of Ren/Kylo Ren/Ben Solo connection — Favreau and Filoni will continue to explore Dr. Pershing’s clone experimentaton and the origins of both Supreme Leader Snoke and Emperor Palpatine’s clones, tying the overall The Mandalorian storyline further into the sequel trilogy.

What are your thoughts on this sad — but highly plausible — theory?