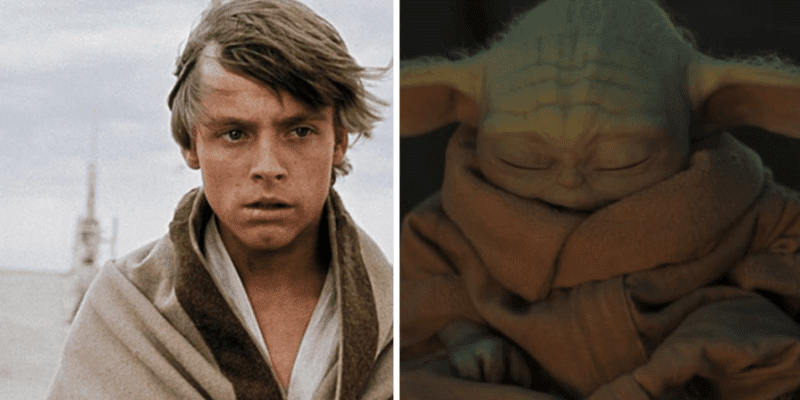 Let me begin by saying this is a theory and there has been no confirmation about Mark Hamill or any other potential Luke Skywalker actor — social media has been calling for Sebastian Stan — appearing in The Mandalorian.

Some fans have noticed, however, that in the following shot [below] from The Mandalorian Season 2, Episode 6 (Chapter 14: The Tragedy), it appears that Grogu is accompanied, very briefly, by a second figure as he sits on the “seeing stone.”

At first glance, while watching the episode on Disney+, I personally thought it was simply a perspective view of the rocks surrounding the “seeing stone.” Now, however, I can see how some Mandalorian fans are operating under the assumption that Grogu did, in fact, actually connect with another Force user in last week’s episode.

Was that Force-sensitive being Luke Skywalker? There’s always a possibility and, if nothing else, it’s certainly a fun option to consider.

There are others, however, who Grogu could have connected with on Tython as well. Cal Kestis (Cameron Monaghan) is an Order 66 survivor who could have potentially reached out to The Child and Samuel L. Jackson himself has indicated he believes Mace Windu survived the Purge.

Furthermore, it seems almost impossible that — as strong as Grogu is — he didn’t connect with another Force user in the galaxy on Tython. In a New Rockstars video that further explains the theory that Grogu and Luke Skywalker have already met.

One of their major points is that at this point in the Star Wars timeline — about five years after the defeat of the Empire in Star Wars: Episode VI – Return of the Jedi — Skywalker is trekking across the galaxy in an effort to gather any and all information he can about the Jedi Order.

A Force user as powerful as Grogu would undoubtedly attract his attention. Furthermore, their theory asserts, we know that Skywalker can project himself, so he wouldn’t necessarily have had to be physically present on Tython to “meet” with Din Djarin’s (Pedro Pascal) charge.

Related: Grogu vs Darth Vader – ‘The Mandalorian’ Hints at Who is Stronger

Social media, as usual, is filled with opinions about whether or not Skywalker and Grogu have actually connected already.

Hush, on the other hand, simply stated:

I do not want Luke Skywalker finding Grogu

I do not want Luke Skywalker finding Grogu.

Zach Baer’s assessment of where The Mandalorian might go is:

I doubt Luke Skywalker answers the call. If Luke knew of Grogu but didn’t have him at his new Jedi order, would seem negligent on Luke’s part. I would love to see Cal there but doesn’t seem like Disney had big plans for him. They thought Fallen Order would fail

I doubt Luke Skywalker answers the call. If Luke knew of Grogu but didn’t have him at his new Jedi order, would seem negligent on Luke’s part. I would love to see Cal there but doesn’t seem like Disney had big plans for him. They thought Fallen Order would fail.

Regardless of where you stand on the “Luke Skywalker meeting Grogu” issue, the fact remains that it’s going to be almost impossible for Jon Favreau and Dave Filoni to avoid — at least loosely — connecting The Mandalorian to the Skywalker Saga in future seasons, particularly with as strong with the Force as Grogu is.

They will, undoubtedly, masterfully weave the connection into The Mandalorian Season 3 — and, if actor Giancarlo Esposito is correct, Season 4 — but exactly how the puzzle pieces are going fit together remains to be seen.