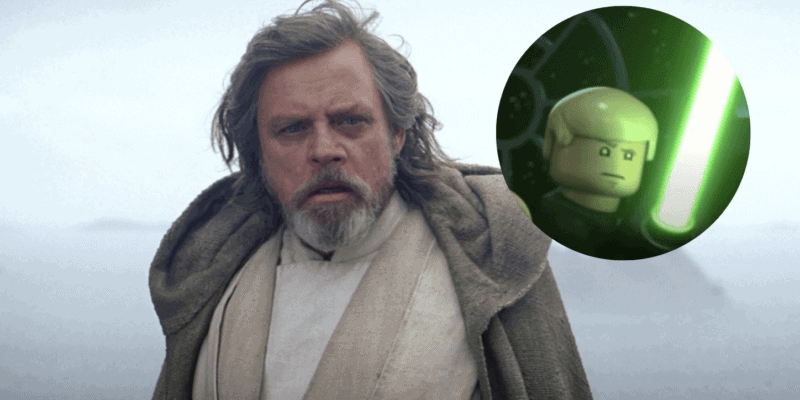 Mark Hamill — who has been synonymous with Luke Skywalker since Star Wars: A New Hope premiered in 1977 — was noticeably absent from the recent Disney+ LEGO Star Wars Holiday Special.

Although most actors from the Star Wars sequel trilogy — Daisy Ridley (Rey), Oscar Isaac (Poe Dameron), and John Boyega (Finn) — did not reprise their roles as voice actors, other Star Wars icons did join the cast of the new animated holiday special. And, Kelly Marie Tran reprised her sequel character, Rose Tico.

I did not play the voice of Luke in the Lego Star Wars Holiday Special because:

A) I didn’t want to risk tarnishing the legendary status of the original.

B) They didn’t ask me to. #TrueStory

I did not play the voice of Luke in the Lego Star Wars Holiday Special because:

A) I didn't want to risk tarnishing the legendary status of the original.

So, there we have it from “Hamill himself.” His followers were sad to hear this news, with many expressing how much they would have liked to hear Hamill’s voice in the new version of the Star Wars Holiday Special.

would’ve been nice to hear u tho

would’ve been nice to hear u tho

I would’ve asked you to

I would’ve asked you to??

Yet another fan, Pete Stagemeyer, offered to showcase Hamill on his own podcast. Stagemeyer wrote:

Since they didn’t ask you, I will! Want to do my podcast? It’s about heists and scams and it’s a good time.

Since they didn't ask you, I will! Want to do my podcast? It's about heists and scams and it's a good time.

While we’re not sure how things will work out for Stagemeyer, we’re sure Hamill has plenty to keep him busy in the meantime. Over the course of the pandemic, he’s been busy paying tribute to Star Wars fans on the front lines of healthcare and even surprising some of them with personal messages.

It is worth noting that Eric Bauza, who voiced Luke in the LEGO Star Wars Holiday Special, has been the voice actor for the character on multiple other occasions. As per CinemaBlend:

Also, Eric Bauza has voiced the role of Luke Skywalker many times before over the years. Back in 2014, he played him in The Yoda Chronicles, along with 2015’s Droid Tales, and 2016’s The Freemaker Adventures. Having the same voice within the LEGO Star Wars continuity makes a lot of sense; plus, giving work to primary voice actors in a largely celebrity-geared animation industry nowadays is kind of a rare win.

What do you think? Should Hamill have been offered the role of Luke Skywalker in the LEGO streaming event? Do you think the reasons for passing him over were budgetary?