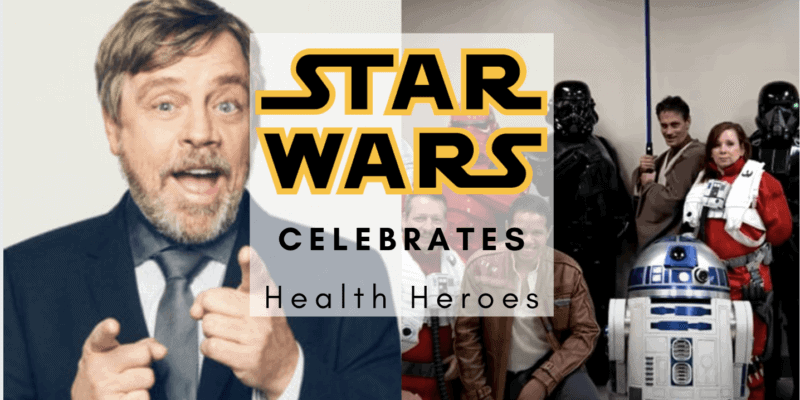 Now, Hamill has joined forces with Lucasfilm to release a video that celebrates Star Wars fans who have been on the frontlines during the recent global pandemic. The full YouTube video showcasing these real-life heroes can be seen below.

Hamill opens the touching video saying, “Hi everyone, Mark Hamill here. We find ourselves facing challenges like we’ve never seen before, but I have to tell you I’m finding so much inspiration in the compassionate, courageous, and selfless fans in our Star Wars family.”

Then, as the classic Star Wars theme song plays in the background, the audience sees a montage of photographs featuring healthcare heroes both in their work uniforms and their favorite Star Wars cosplays.

Hamill narrates the entire Lucasfilm YouTube video, sharing tidbits about some of the Star Wars fan healthcare workers who are featured. He specifically notes “Huang Bin, a 501st member and respiratory doctor in Hangzhou, China who often limits himself to just a few hours of rest every 36 hours, voluntarily staying at the hospital for over two months without ever seeing his family.”

Also featured is “Sarah Kozmin of the Mandalorian Mercs in Belgium who works as a geriatrics nurse in her hospital’s COVID unit.” We love how Hamill and the Lucasfilm team showcased health heroes from all over the globe. The Star Wars fandom, after all, knows no borders!

From the United States, Hamill recognizes the “Rebel Legion members of Indiana who have partnered with a local hospital to upcycle surgical fabric into medically effective masks for first responders.”

There are many more real-life hero Star Wars fans showcased in this inspiring Lucasfilm video. At just under 2-minutes long, the Mark Hamill-narrated video montage is a great way to quickly give yourself a mood boost!

What do you think about this celebration of Star Wars healthcare heroes? Whether or not you’re a Star Wars fan, tell us your take on Hamill’s narration in the comments!

Comments Off on Mark Hamill Celebrates “Star Wars” Fans on the Frontlines!