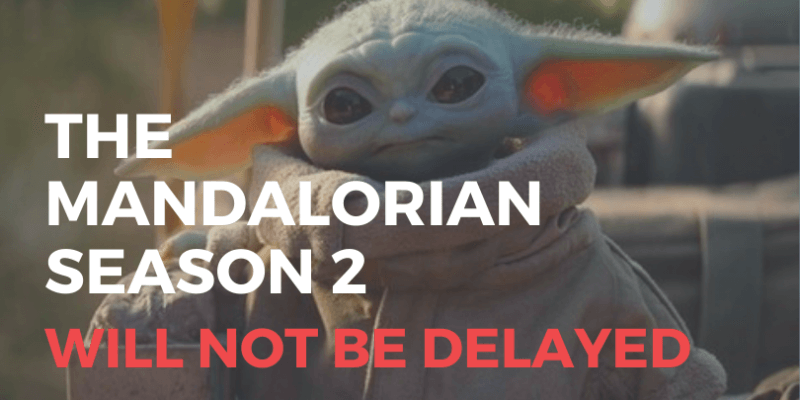 In a recent interview with CNN, Disney CEO Bob Chapek touched upon the upcoming release of The Mandalorian Season 2.  As Chapek worked through the numerous projects Disney had in the oven, Chapek said, “there will be no delay on The Mandalorian.“ This was because the entirety of Season 2 was shot and wrapped before the outbreak earlier this year, and we’re thankful for that timing. All editing and final work can be done remotely by producers and crew, allowing The Mandalorian Season 2 to be released on time to Disney+ viewers around the globe.

New episodes are slated to be released this October 2020. Following the immense global success of Season 1, fans will be following along with Din Dijarin as he attempts to keep his young ward, The Child (affectionately known as “Baby Yoda”) safe from other bounty hunters and intergalactic threats. While we don’t know many of the details behind the plot of Season 2, it is clear from the Season 1 finale that we will be searching for The Child’s home planet.

The Return of Boba Fett was confirmed by The Hollywood Reporter, who also confirmed that Boba Fett would be played by Temuera Morrison, the man who played Boba’s father, Jango Fett, in Star Wars: Attack of the Clones. Keeping these characters in already established actor portrayals is exciting for hardcore fans across Star Wars entertainment options.

Boba Fett is expected to play just a small role in season two of the series, after the character was teased in the season one episode “The Gunslinger,” when a mysterious figure sporting the bounty hunter’s trademark spurs approached the apparently lifeless body of Fennec Shand (Ming-Na Wen). – THR

We are also looking forward to the appearance of Ahsoka Tano, played by Rosario Dawson and a reported appearance by another unnamed bounty hunter (Michael Biehn). Of course, as with any news story, these The Mandalorian Season 2 plans could always change. As our society continues to evolve and shift with these modern challenges of the “new normal,” Season 2 (and therefore Season 3) could be pushed back if visual effect editing and post doesn’t go according to plan. We’ll be looking to Disney+ in October of 2020 for the release of The Mandalorian Season 2!

Season Three of The Mandalorian

Watch for Season three announcements as time passes, as the script and episodes are already in development. Inside the Magic detailed Season Three workings for The Mandalorian in this previous article. Per a Variety report, The Mandalorian Season 3 is already in development for Disney’s streaming service.  “Jon Favreau has been ‘writing season 3 for a while,’ and that the art department, led by Lucasfilm vice president and executive creative director Doug Chiang, has been creating concepts for Season 3 ‘for the past few weeks.’”

Disney+ was hyped at the end of 2019 with slated programming that fans were champing at the bit for. The release of many Marvel shows like  The Falcon and The Winter Soldier, and WandaVision were in jeopardy of being released on time, and with viewers craving more original content, Disney certainly wants to release these shows on time. Viewer demand remains high, and this new digital at-home platform may trump any possibility for movie theatres being in full swing during the fall and winter seasons. This altogether opens the spacecraft door wide for The Mandalorian’s return.

Will you be watching along for The Mandalorian Season 2? Leave us a comment below!