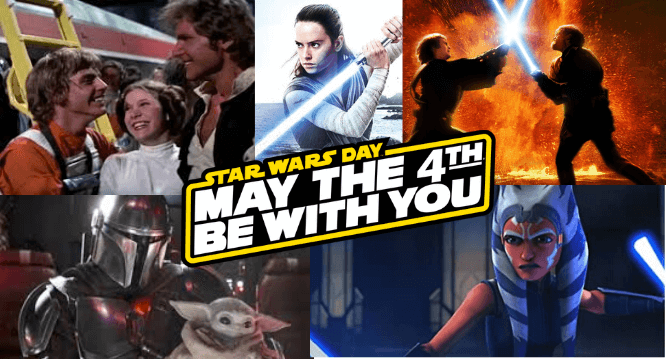 We’ve seen some wonderful Star Wars related content from Disney and Lucasfilm in honor of May the 4th; AKA; Star Wars Day. The companies have released a free Star Wars ebook as well as a Mandalorian themed monopoly set, but that’s just the tip of the iceberg.

On the official Star Wars Youtube channel, the company released an emotional retrospective of the entire saga that’ll be a tearjerker for any Star Wars fan.

Its an amazingly nostalgic video, especially as it features sadly departed stars like Carrie Fisher and other original trilogy actors. Take a look;

The Star Wars May The 4th Video

The Star Wars series is one of the most deeply entrenched within popular culture and it’s not hard to see why. Every Star Wars movie is somebody’s first and favorite, so on May the 4th, it’s amazing to be able to connect as a community and appreciate just what an amazing franchise Star Wars truly is.

Seeing characters like Han Solo, Princess Leia, and Chewie alongside prequel characters like Anakin Skywalker and then sequel favorites like Rey and Finn really just hammers home how big this galaxy is.

From The Clone Wars to the Skywalker Saga, there’s something for everyone in George Lucas’s galaxy and its awesome to honor that every Star Wars Day.

May the 4th is Star Wars Celebration Day

I love hearing what people’s first Star Wars memories are. Personally, I have vivid memories of being a kid and watching Star Wars Episode VI: Return of the Jedi. My Dad did a killer Jabba impression which both scared me and made me laugh.

I also have a huge soft spot for the LEGO Star Wars video games, starting with the original LEGO Star Wars on PS2. As a fan of both LEGO and Star Wars, it’s kind of a no-brainer. The charm of seeing my favorite Star Wars characters in cute LEGO form instantly had me hooked.

Please let me know your favorite Star Wars memories in the comments below. I’d love to hear them.

How will you be celebrating May the 4th? Will you be marathoning the Star Wars movies on Disney Plus tonight? Or perhaps you’ll celebrate Star Wars Day by finally watching Star Wars: The Clone Wars. Whatever the case, let us know below Star Wars fans. And may the force be with you, always.