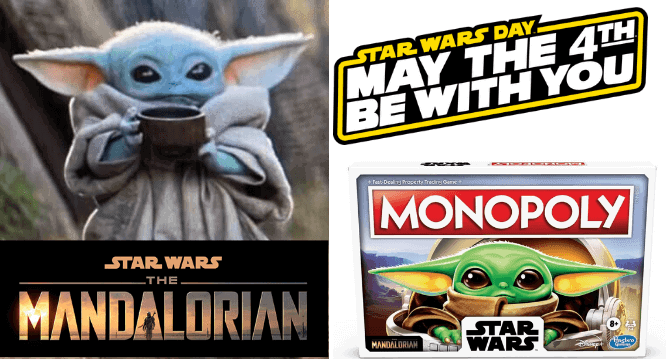 Star Wars: The Mandalorian continues to be a cultural sensation. A big part of this popularity (aside from the wider Star Wars brand recognition) is one little green star that has taken the galaxy by storm.

In episode one, The Mandalorian was tasked with bringing in Baby Yoda and exchanging his bounty puck for cash. Since then, Baby Yoda has had every Star Wars fan around the world, letting out a collective ‘awww’ at every episode of the Disney Plus tv series.

But if you thought the Baby Yoda craze was dying down, Star Wars and Hasbro have other ideas. They decided that a Child Edition Mandalorian Monopoly game is what the world needs right now, and heck, I can’t argue that.

Let’s take a look at the game inspired by everyone’s favorite baby character!

Entertainment Earth is now taking pre-orders for this very special edition of Monopoly based around the child. Disney can’t call him Baby Yoda as that obviously isn’t his official name, but come on. We all know this is Star Wars: The Mandalorian BABY YODA edition.

When Can I get a Star Wars The Mandalorian The Child Edition Monopoly Game?

That’s the catch. Unfortunately, we won’t be able to play the Child Edition monopoly game until September. But hey, at least that means that we can all spend Christmas with the galaxy’s most adorable baby!

Baby Yoda has been the subject of so much merch since he took The Mandalorian and the wider Star Wars community by storm. The little baby became an instant fan favorite and has been immortalized by more than one Funko pop and Star Wars: Black series action figure toy.

Apart from the gorgeous Mandalorian and Baby Yoda themed artwork, this is a standard monopoly game. It comes with four Baby Yoda player characters and obviously features properties and cards inspired by The Mandalorian.

We could really see Han and Chewie playing with this gameboard on long trips aboard the Falcon; it’s a delightful monopoly set from Hasbro. It retails at just 19.99 credits- err.. dollars.

For fans of The Mandalorian tv series, Baby Yoda, The Skywalker Saga, or just anything Star Wars, this Baby Yoda monopoly game is a must. I’ll definitely be picking up this incredible Star Wars board game for the holiday season.

Mind you, anything Star Wars, board game, or video game-related is a-ok in my mind. And anything Disney. And everything Baby Yoda. Man, I love that little green baby; he’s so precious!

Will you be purchasing the Mandalorian The Child Edition Monopoly Game? How are you celebrating Star Wars day? Which baby is cuter; Baby Groot or Baby Yoda? Let us know in the comments below.