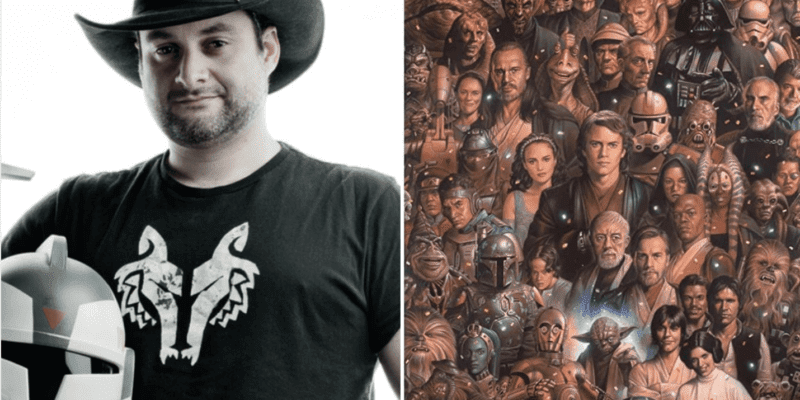 When the new Disney+ Star Wars series, Disney Gallery: The Mandalorian, premiered on Star Wars Day 2020, fans knew that the show would provide a behind-the-scenes look at the hit Disney Plus show and that Jon Favreau would be taking the lead.

What people might not have been expecting, however, was to realize that Dave Filoni is, arguably, the force that should be driving the Star Wars franchise from here on out. In Disney Gallery Episode 3, “Legacy,” the round table discussion revolves around George Lucas and the future of the incredibly galaxy he created in the 1970s.

Throughout the conversation all of Favreau’s round table attendees participate, with Kennedy noting that Lucas was responsible for an incredible 126 technology patents.

Filoni, in particular, though, really gets what Star Wars means to fans and what Lucas consistently strove to do with the Skywalker storyline. At one point during the Disney Gallery: The Mandalorian “Legacy” episode, Filoni states, “I think Star Wars is such a part of people’s lives that it’s something that they just see on a regular basis that when you say ‘George Lucas’, I don’t think people give enough full value to what that really means.

He continued, “I like to think I do, but I worked with him. So, I’ve seen him [George Lucas] create. I’ve seen the person that comes up with a line of dialogue and understands Anakin Skywalker and Luke Skywalker in a very deep level because the characters are a part of him.”

Filoni’s acknowledgement that he may never fully mimic Lucas’s connection to the Star Wars universe himself is part of the reason he’s the perfect person to take the lead on Star Wars going forward. He will always be working towards making the franchise what Lucas would want it to be.

Filoni explained, “So, Qui-Gon loses, of course, so the father figure, he knew what it meant to take this kid [Anakin Skywalker] away from his mother when he had an attachment and he’s left with Obi-Wan. Obi-Wan trains Anakin at first out of a promise he made to Qui-Gon, not because he cares about him.”

He continued, “When they get Anakin, they find him on Tatooine he says why do I feel like we’ve found another useless lifeform. He’s comparing Anakin to Jar Jar and he’s saying this is a waste of our time, why are we doing this, why do you see importance in these creatures like Jar Jar Binks and this ten-year-old boy? This is useless.”

“So, he’s a brother to Anakin, eventually, but he’s not a father figure. That’s a failing for Anakin, he doesn’t have the family that he needs. He loses his mother in the next film. He fails on this promise that he made to his mother that I will come back and save you. So he’s left completely vulnerable and Star Wars ultimately is about family,” Filoni’s analysis continued.

“So, that moment in that movie, which a lot of people diminish as a cool lightsaber fight, but it’s everything that the entire three films in the prequels hangs on.”

In addition to his compelling argument that this single fight scene is the crux of the entire Star Wars Skywalker saga, Filoni took a deep look at the character of Luke Skywalker, saying, “It’s amazing when you watch Return of the Jedi that Luke has never done anything that I would call, like he’s a bad character. He has a tendency to be dark and a lot of people wanted Anakin, oh he should have been darker as a character.”

Filoni further stated, “It’s not at all. I believed Luke would turn to the dark side. I believed he would kill the emperor and because of the way George arranged this story, I knew that was the wrong thing to do. When he’s saying, you want your weapon, you know strike me down, I’m defenseless. He wants him to give into his anger and give into his hate and the feature, the structure that George has laid out in all the movies is coming to fruition now.”

With Mark Hamill confirming that he will not be reprising his role as Luke Skywalker again after over 40 years, there is no better time for Filoni to take on an even bigger role in the Star Wars movie and television universe than he already has.

Filoni has already overseen numerous Star Wars series, including Star Wars: Clone Wars and Star Wars Rebels, over the course of his work with Lucasfilm.

Do you think Star Wars fans would like to see Dave Filoni lead the Star Wars storyline moving forward? Tell us your thoughts about how big of a role Filoni should play in the comments!

Comments Off on “Disney Gallery: The Mandalorian” Proves Dave Filoni Should Take Over “Star Wars”