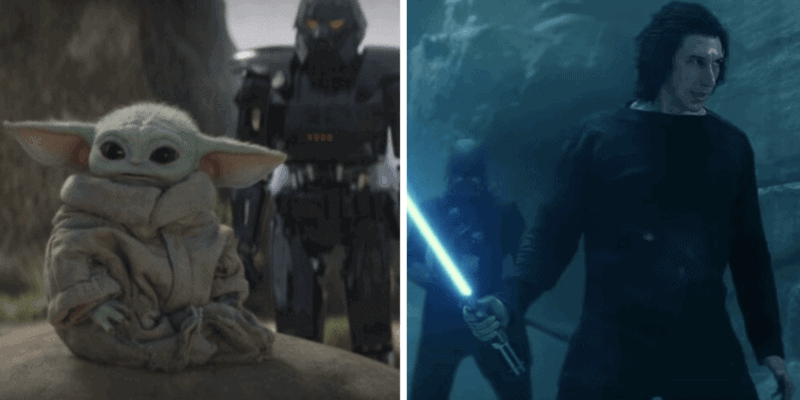 During Season 2  of The Mandalorian — which came to an epic conclusion with the second season finale, Chapter 16: The Rescue, on December 17 — Episode 6 (Chapter 14: The Tragedy) was, in a word, tragic. Appropriately. This episode gave fans an inside look at just how strong Grogu’s Force powers are as he sat on the “Seeing Stone” on Tython.

By the end of the episode, Din Djarin (Pedro Pascal) has lost…well, basically everything — Grogu (AKA “The Child” AKA “Baby Yoda”) and the Razor Crest are gone at the hands of Moff Gideon, leaving him with just his armor and not much else.

Before the “tragedy” part of The Tragedy, however, Grogu gets to sit on the seeing stone he was directed to by Ahsoka Tano (Rosario Dawson) in last week’s installment, Chapter 13: The Jedi.

Because there’s a lot going on — Din trying to figure out what on earth Slave I is doing in the vicinity, for example — it’s not easy to tell exactly what Grogu is experiencing during his time on the seeing stone.

Although he is clearly in the midst of a moment with the Force, we don’t hear any recognizable voices, there are no visible Force ghosts, and Grogu himself doesn’t give any indication of who he is connecting with — be it Master Yoda (Frank Oz), Mace Windu (Samuel L. Jackson), Cal Kestis (Cameron Monaghan), or anyone else.

“Okay,” you’re probably thinking by now, “what does all of this have to do with Ben Solo?”

Perhaps quite a bit.

One of the few discernible things viewers see while Grogu is on the seeing stone is a blue butterfly. As per Nerdist’s in-depth assessment of the Star Wars Kids YouTube channel’s Star Wars Roll Out show, this insect has great significance in young Ben Solo’s life.

Their article shares two specific episodes of the short show. The first features this official description:

Sweet but chaotic Ben Solo keeps bungling the plans of his dad Han and his Uncle Chewbacca. When he secretly tags along on their mission to capture some crystal butterflies, a gang of rival Bug Hunters make Ben look like the least of their problems!

Han Solo and Chewbacca have been captured by the Bug Hunters, but Ben Solo just might be able to set them free–while wrecking the evil gang’s plans!

ComicBook also connected the dots between The Child and Ben Solo — who later turns to the dark side and becomes Kylo Ren while serving Supreme Leader Snoke:

With The Mandalorian set five years or so after Return of the Jedi, it’s expected the young Solo is around four or five years old at this point in time. Because of that, it’s possible one of the Force-sensitive people that responded to Grogu was the Star Wars villain, long before his Kylo Ren days.

Although we can’t know for sure if Mandalorian showrunners Jon Favreau and Dave Filoni were making a sequel trilogy reference with their inclusion of a blue butterfly, it seems unlikely that this happened purely by chance. Could Grogu possibly be headed for a similar redemption story in The Mandalorian Season 3 and Season 4?

This also wouldn’t be the first time the creative team alluded to the sequels in a subtle, yet major, way this season — they’ve already done some work explaining Snoke’s existence.

If Favreau and Filoni were blatantly referencing Ben Solo, what do you think they were getting at? Will Solo — or Ren — somehow play a role in Grogu’s life in the future?